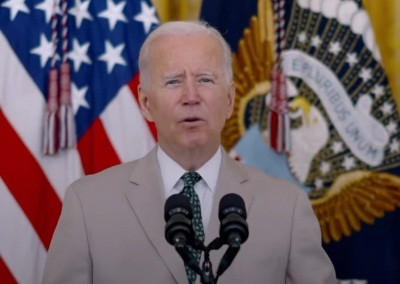 Washington, Oct 22
US President Joe Biden said that Washington was committed to coming to Taiwan's defence if it comes under attack from China - a stance that seems in opposition to America's stated policy of "strategic ambiguity", CNN reported.

Asked twice during CNN's Town Hall on Thursday whether the US would protect Taiwan if China attacked, Biden said it would.

"Yes, we have a commitment to do that," he said.

Biden has made similar statements in the past, only to have the White House say longstanding US policy had not changed toward the island.

The US provides Taiwan defensive weapons, but has remained intentionally ambiguous on whether it would intervene militarily in the event of a Chinese attack, the report said.

Under the "One China" Policy, the US acknowledges China's claim of sovereignty over Taiwan.

In recent weeks, Beijing has sent dozens of warplanes near into Taiwan's Air Defense Identification Zone (ADIZ), and Chinese President Xi Jinping has said that "reunification" between China and Taiwan was inevitable.

A White House official attempted to clarify Biden's comments on Taiwan after the town hall, saying the President was "not announcing any change in our policy and there is no change in our policy" in his remarks about China and Taiwan, the report added.

Biden, citing his relationship with Xi, said he wasn't looking to enter a prolonged conflict.