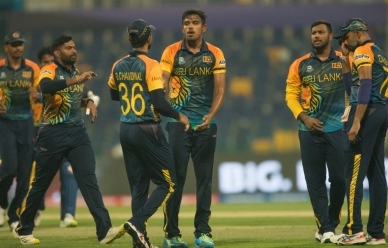 Sharjah, Oct 22
Former World T20 champions Sri Lanka will look to solve top-order problems in their last First Round Group A match against the Netherlands, while the Dutch will want to give their most decorated cricketer, Ryan ten Doeschate, a winning farewell when the two sides meet at the Sharjah Cricket Stadium later on Friday.

With the best net run-rate in the group and a two-point lead over any other side, 2104 World T20 champions Sri Lanka are primed to top their group barring anything drastic. The Sri Lankans have lived up to their top billing in the group stages but have had their problems, having to fight back against Ireland in their previous game.

With just eight runs on the board and three players back in the dressing room, Sri Lanka were in dire straits, when all-rounder Wanindu Hasaranga -- promoted to No. 5 -- counter-attacked in the Powerplay to dig his side out of the hole. He was supported by opener Pathum Nissanka in a match-defining partnership of 123 runs. Eventually, Sri Lanka won by 70 runs.

The Netherlands too got through the first three wickets of Namibia quickly but were then frustrated by David Wiese, who notched an unbeaten 66 that paved the way for the Dutch's second straight loss in the tournament.

"I think we were below par in both games," he said after the six-wicket loss to Namibia that confirmed their exit from the tournament. They will, however, want to bow out on a high, with the extra motivation being to give Netherlands' greatest cricketer, Ryan Ten Doeschate, a winning farewell.

Ten Doeschate, too, will hope to leave his mark in his final match the same way he did with his two centuries at the 2011 Cricket World Cup.

Sri Lanka meanwhile will be hoping their top order fires after poor starts in their two games so far.

Sri Lanka coach Mickey Arthur had conceded the No. 3 spot has been a problem since the loss of Danushka, Kusal Mendis, and Niroshan Dickwella due to prolonged bans.

"If we can just get that No. 3 position shelved down, we'll be good. Dinesh Chandimal has it at the moment. Hopefully, he gives us a performance at some stage. We've got young Charith Asalanka, who I think is another young player that's going to play a lot for Sri Lanka, just waiting in the wings. I'm just waiting for someone to grab that position and make it their own," the coach had said.

Following a second failure for Chandimal against Ireland and with Sri Lanka having little to lose against Netherlands, Arthur may see this as an opportunity to give Asalanka a chance in the XI.

A Sri Lanka win will guarantee they finish on top of the group. Even with a loss they are likely to top the group.