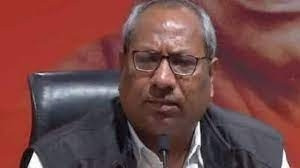 Lucknow, Oct 28 A day after being sworn in as member of the Uttar Pradesh Vidhan Parishad, Nishad Party President Sanjay Nishad said that his party will contest on its symbol from Nishad-dominated seats in the 2022 state Assembly elections.

The party has entered into an alliance with BJP for the polls.

Sources in the BJP said that the party planned to give some seats to the Nishad Party on the condition that its candidates will contest on BJP symbol.

"I feel he is saying these things for public consumption and to ward off criticism. All modalities have already been cleared and communicated to him," said a BJP functionary.

Sanjay Nishad said: "The Yogi government is working on our demand for reservation for Nishad community. Soon, we will make an announcement in this regard."

The Nishad Party has been facing flak from Bihar's Vikassheel Insaan Party (VIP) which has been accusing him of a sell-out.

"Mukesh Sahni has our blood. He is working to help us know about our negative votes. We will try to bring back the negative votes. Nishad Party and VIP are working on the lines of Lalu Yadav and former Uttar Pradesh Chief Minister Mulayam Singh Yadav. There is an understanding between us. After the 2022 UP assembly elections, VIP will go back to Bihar," Sanjay Nishad added.