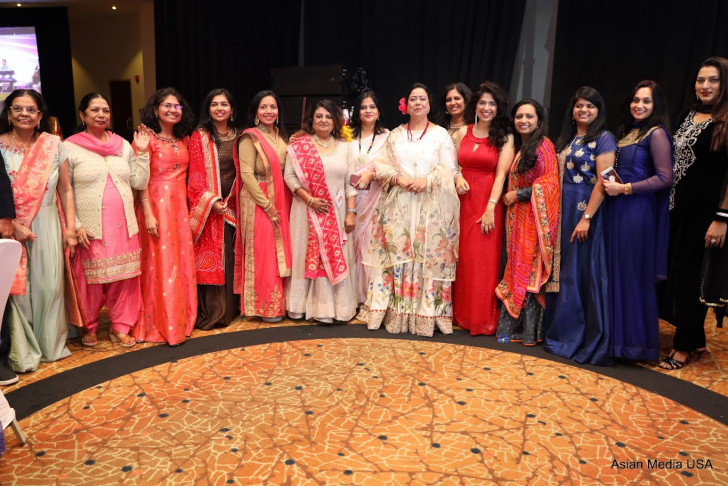 Chicago IL: On October 17, 2021, MAFS kicked off a star studded and safe in person event after a year and a half of combating COVID-19. It was a colossal success! October 17th is a very significant date for MAFS as the Governor of Illinois Proclaimed this day as “MAFS DAY”.

Vibrant and Charming Neil Khot and Richa Chand were the emcees who did a tremendous job who kept the show exciting until the very end. Dr. Vijnay Prabhakar did an excellent job outlining the show as the chair of the Gala.

This was followed by the Governor of Illinois, J. B. Pritzker’s speech where he praised and appreciated MAFS’s commendable work to serve and empower the seniors and immigrant communities for 29 years. This is certainly a big honor for MAFS! Next was an elegant dance performance, Ganesh Vandana by renowned dancer Madhura Sane who filled the stage with her graceful and pious dancing praising Lord Ganesh. Her beautiful and eloquent dance moves were a treat to watch. We felt as though Lord Ganapathy had graced the occasion.

Next, Dr. Firduas Jafri, President of MAFS who is an accomplished dentist with her own practice in Carol Stream, IL addressed the audience with her welcoming speech and asked the people to donate generously to support MAFS to sustain its programs to help the community. This was followed by our very own vibrant Grants Manager, Roshita Pandey’s speech on MAFS in action 2020 – 2021. Here she welcomed the dignitaries as she glorified and detailed the vital programs of MAFS. She stressed on the fact that MAFS is a Not-For-Profit organization with limited funding. She amplified that in order to continue its programs which is much needed by our seniors we depend on gracious donors to cover the expenses that the grants do not cover. Her passion for MAFS programs to help the community was obvious in her speech. Kudos to you Roshita Pandey!

A special shout out to the dancers from the Tarana Dance Academy and the Saloni group. The experienced dancers were well coordinated with precise choreography which helped them receive a loud roar of applause from the audience. Their choice of costume was so apt.

Next was the annual report/ Financial Review given by Mr. Sagar Kumar/ CFO, MAFS. He put together a clear vision of the report. He said that this year was the best year for MAFS financially and gave credit to our Grants Manager Roshita Pandey for her efforts to bring in Grants for MAFS.

Congresswoman Robin Kelly, chairman of the democratic party of Illinois was called on stage to talk as our Keynote speaker. In her speech she praised MAFS for its life changing programs and connecting with seniors of the community to keep them safe and well. She said lot of her work is related to what MAFS does. She praised Dr. Mrs. Santosh Kumar for her hard work and dedication to serve the community. She is grateful for the work MAFS does to serve the undeserved population to lead a better life through the vital programs like Medicare, Medicaid, social security, snap and many more. She continued to praise MAFS for serving more than 10,000 people and said that it was “Remarkable”. She applauded Dr. Santosh Kumar for keeping her doors open with the programs for the people who may not find these vital programs elsewhere. She compelled MAFS to continue its programs especially programs like the adult literacy program, Translation and interpretation program, immigration program. She thanked MAFS for being a liaison to Washington in serving the community with all its vital programs. She said that Washington is working on helping organizations like MAFS to better serve the elderly. Hats off to MAFS!

Next our very own Naperville staff showcased a colorful garba dance. Kudos to all our Naperville participants for doing such a great job and showing off their hidden talents. Following this entertaining dance, Congressman Rajakrishnamoorthi spoke and praised Dr. Santosh Kumar for her outstanding work to the community. He urged people to donate for the good cause and dedication of MAFS. He mentioned that Dr. Kumar is so aptly named “Mother Theresa of Chicago”, a title well deserved. He also thanked Dr. Jafri and other board members. He thanked the other dignitaries present like, Congresswoman, Robin Kelly, Mayor of Hanover Park - Rodney Craig, Senator Laura Murphy, Senator Cristina Castro, Representative Michelle Mussman and Representative Janet Yang for taking the time to join this gala to support MAFS. He wished everyone Happy Dasahara and a Happy Diwali which is the season of triumph of good over evil and knowledge prevailing over ignorance. He said that what MAFS does really works for the community since they served more than 32,000 meals this year and more than 10,000 underprivileged people were served. He added when an immigrant senior comes to the US, they are lonely and the only place they can turn too is MAFS! What an honor for MAFS! Thank you, Congressman Rajakrishnamoorthi, for having faith in MAFS. Since MAFS serves the seniors of the community, he is happy to vote for the reauthorization of the Older Americans ACT, which provides nutritional assistance, support for caregivers as well as disease prevention. He urged everyone to support MAFS to sustain its program to better serve the community.

Next was a heartwarming narration by MAFS Participants Tripta Malhotra and Jayesh Desai, who very warmly narrated the impact MAFS played to better their lives. They specially thanked Dr. Santosh Kumar for assisting the seniors through her various centers. They consider MAFS centers as their second home. They said how much the programs like Yoga, Adult literacy programs, fresh and healthy meals program, congregating with other seniors and many more, have played an important and positive role to eliminate isolation and other problems the seniors combat especially during the Pandemic.

Later Dr. Sreenivasan Reddy invited Honorable Consul General Mr. Amit Kumar to give a speech. In his speech, the Consul General congratulated MAFS and all the recipients. He praised Dr. Santosh Kumar for her commendable social service to the community like promoting mental health program and other beneficial public benefits programs. He wished MAFS success to grow and continue their estimable work. He also spoke about India’s progress regarding COVID vaccinations and other issues in India. Thank you, Honorable Consul General, for being a well-wisher and supporter of MAFS!

The highlight of the show was revealed when the video of the new MAFS 15th Senior Center on Devon Ave., was presented. It is narrated by our very own IT Director Mr. Prashant Kumar and CFO Mr. Sagar Kumar. In this video they narrate the evolution of the state of the art, 20,000 sq. ft center for seniors. It is truly an amazing jaw dropping video. The center is supposed to be up and rolling early November just in time for Diwali. All are invited to view this amazing piece of art exclusively designed for our seniors. Mr. Prashant Kumar and Mr. Sagar Kumar have dedicated this center to their parents and called it “The Pramod and Santosh Kumar Senior Center of Excellence!!! A must-see place, and surely, a future landmark of the Chicagoland area at 2522 West Devon Ave! To view this video please click on the link.

Next Mrs Surabhi Kumar (w/o Consul General of India) unveiled the MAFS souvenir book. The first recipient of this souvenir book was Mrs. Meghna Bansal, Trustee, Wheatland, Township. Mrs. Bansal congratulated MAFS for serving her mother-in-law who is a participant of MAFS. Dr. Asthana and Sagar Kumar were the other recipients of the souvenir. In her speech Mrs. Surabhi Kumar congratulated Dr. Santosh Kumar for her dedication and personal commitment to serve the seniors. She mentioned that she was touched when she witnessed the seniors of the MAFS sing the “Jana Gana Mana” with utmost reverence on the 75th Independence Day celebration of India. She concluded her speech assuring her support for MAFS and its future endeavors.

To conclude the program, Dr. Mrs Santosh Kumar, a true “Mother Theresa of Chicago” thanked one and all for their support to MAFS. The show concluded with the melodious entertainment by Pavithra Anand and Parth Patel. Their songs were so captivating that the whole staff danced to make this event a big success! GOD BLESS MAFS! 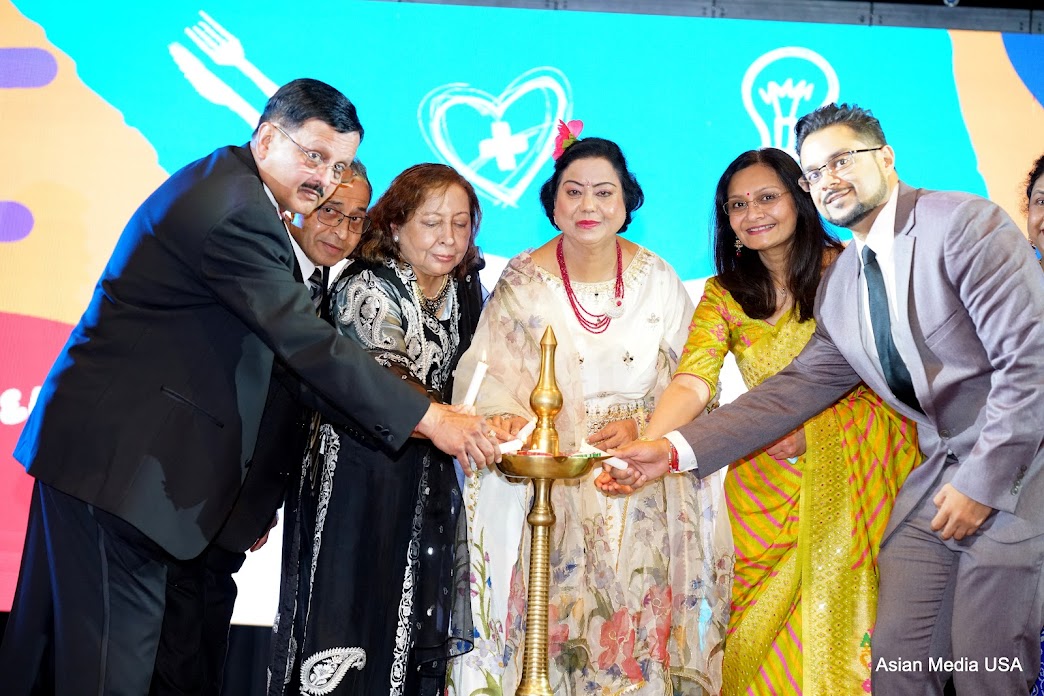