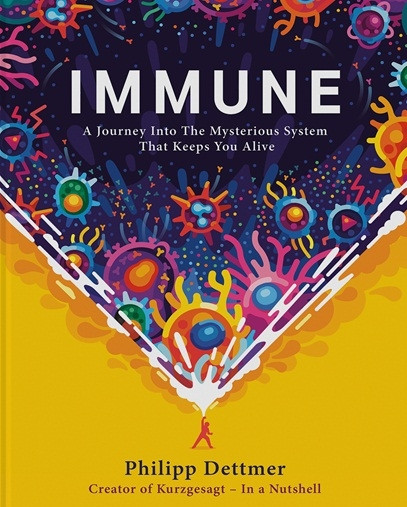 New Delhi, Nov 19 : "Immune" is the first book from Philip Dettmer, the creator of the hugely popular science YouTube channel, "Kurzgesagt - In a Nutshell", a gorgeously illustrated deep dive into the immune system that will forever change how you think about your body.

Consider this: You wake up and feel a tickle in your throat. Your head hurts. You're mildly annoyed as you get the children ready for school and dress for work yourself. Meanwhile, an utterly epic war is being fought, just below your skin. Millions are fighting and dying for you to be able to complain as you drink your cup of tea and head out the door.

So what, exactly, is your immune system?

Second only to the human brain in its complexity, it is one of the oldest and most critical facets of life on Earth. Without it, you would die within days. In "Immune" (Hodder & Stoughton/Hachette), Dettmer helps you weave your way on a journey through the fortress of the human body and its defences to unveil the constant battle of staggering scale raging within us - stories of invasion, strategy, defeat, and noble self-sacrifice.

In fact, in the time you've been reading this, your immune system has probably identified and eradicated a cancer cell that started to grow in your body.

"So, in the hands of your immune system lies an enormous responsibility to keep you well for as long as possible. Even if the battle will eventually be lost in the end, it matters to you today, right now, that it is fought well and with the necessary responsibility," Dettmer writes.

What makes the immune system so fascinating, he notes, is that all of its complex work "has to be done by parts that are mindless and, individually, pretty dumb. And yet they are able to coordinate and react to dynamic and quickly developing situations. Imagine the Second World War happening, but ten times as large and without generals. Only mindless immune soldiers on the ground trying to figure out if they need tanks or fighter jets and where they need to go. And it all happens within days. That's what it is like for you to battle even a common cold".

To this end, each of the 45 chapters, spread over four parts – Meet Your Immune System, Catastrophic Damage, Hostile Takeover, Rebellion and Civil War - delves deeply into an element of the immune system, including defences like antibodies and inflammation as well as threats like viruses, bacteria, allergies and cancer, as Dettmer reveals why boosting your immune system is actually nonsense, how parasites sneak their way past your body's defences, how viruses - including the coronavirus - work, and what goes on in your wounds when you cut yourself.

Enlivened by engaging full-colour graphics and immersive descriptions, "Immune" turns one of the most intricate, interconnected, and confusing subjects - immunology - into a gripping adventure through an astonishing alien landscape.

Challenging what you know and think about your own body and how it defends you against all sorts of maladies and how it might also eventually be your own downfall, "Immune" is a vital and remarkably fun crash course in what is arguably, and increasingly, the most important system in the body.

"All of this beautiful complexity carries a hint of sadness," Dettmer writes in "A Final Word". "It stings to know that life is too short and too busy to truly learn about all the layers that make up reality. But hey, there is nothing we can do about that. What we can do is take up the challenge from time to time and put in the effort to get a glimpse into something so much larger than us.

"Even if we will never get to the bottom of it."

Dettmer is the founder and head writer of Kurzgesagt, one of the largest science channels on YouTube with over 15 million subscribers and one billion views. After dropping out of high school at age fifteen, he met a remarkable teacher who inspired in him a passion for learning and understanding the world. He went on to study history and information design with a focus on infographics.

After college, Dettmer started Kurzgesagt as a passion project to explain complicated ideas from a holistic perspective. When the channel took off, he dedicated himself full-time to making difficult ideas engaging and accessible.