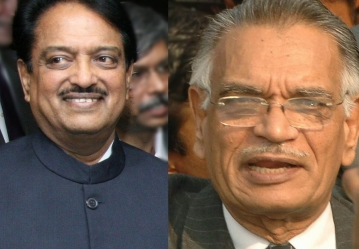 New Delhi, Nov 25
As the nation mourns the bravehearts and civilians who lost their lives in the 26/11 Mumbai attacks, and a controversy rages on Congress leader Manish Tewari's new book, '10 Flashpoints; 20 Years', where he has targeted the Manmohan Singh-led UPA government for not taking any decisive action, two names of two Maharashtra Congressmen -- Shivraj Patil and Vilasrao Deshmukh -- stand out as the first political heads to roll in the aftermath of the tragedy.

The mild-mannered Patil, who was known for more for his sartorial sensibilities than for his administrative capabilities had to resign as Union Home Minister a day after the NSG's Operation Tornado brought an end to the three-day siege on India's commercial capital by Pakistani terrorists.

In secret U.S. Embassy cables exposed by Wikileaks, the then American ambassador, David Mulford, had described Patil as "spectacularly inept" and reported to the State Department that in his last four years as Union Home Minister, "he has been asleep on the watch" and each time there were calls to remove him, "Sonia Gandhi has protected him".

But no one could stop Patil from being singed by the 26/11 attacks. The joke doing the rounds about him was that he was getting a change of clothes ironed for television appearances even as Mumbai was in the grip of terror. He was promptly replaced by the then Union Finance Minister, P. Chidambaram.

Interestingly, Patil, who represented Latur (Maharashtra) in the Lok Sabha and held ministerial positions in New Delhi off and on since 1980, airbrushed the 26/11 attacks from his autobiography, 'Odyssey of My Life', although he wrote at length about the 1999 hijacking of the Indian Airlines flight IC-814.

In 2010, Patil was rehabilitated and appointed the Governor of Punjab and Administrator of the Union Territory of Chandigarh, an office he demitted after completing his term in 2015. For a man who was Lok Sabha Speaker and Union Home Minister, it was evidently a demotion. And he has not been able to make a political comeback since then.

Following Patil, another politician from Latur, the late Vilasrao Deshmukh, who had become Maharashtra's chief minister for the second time in November 1, 2004 (his first term was cut short by factionalism in the party and he to make way for Sushilkumar Shinde in January 2003).

Deshmukh lost his job on December 6, 2008, along with the state's then home minister, R.R. Patil. He was succeeded by another Congressman, Ashok Chavan, who is at present Maharashtra's PWD Minister in the Maha Aghadi government.

The then chief minister was under fire, but no action was taken against him immediately after the terror attacks. What tilted the scales against him was the "conducted tour" he gave to the noted film director Ram Gopal Verma around the devastated Taj Mahal Palace hotel in Mumbai. Deshmukh's architect son, Riteish, is a well-known Bollywood actor known for playing comic roles.

Verma went on to make a film titled 'The Attacks of 26/11' (2013), starring Nana Patekar, who played Rakesh Maria, Mumbai's former top cop who was given the charge of investigating the event and interrogating the Pakistani terrorist Ajmal Kasab.

The Congress gave Deshmukh a Rajya Sabha ticket and he moved to New Delhi in May 2009 as a minister in Manmohan Singh's second UPA government. He died in harness in Chennai in 2012.

Thirteen years after 26/11, its repercussions are still felt within the Congress as the BJP has found a new issue to flog after the sensational observations of Manish Tewari in his new book, which is to be officially released on December 2.

"For a state that has no compunctions in brutally slaughtering hundreds of innocent people, restraint is not a sign of strength; it is perceived as a symbol of weakness," Tewari writes in his book. "There comes a time when actions must speak louder than words. 26/11 was one such time when it just should have been done. It, therefore, is my considered opinion that India should have actioned a kinetic response in the days following India's 9/11."

These words will haunt the Congress for some time, but they offer little solace to the families and friends of the more than 160 people killed by terrorists from Pakistan on November 26, 2008.