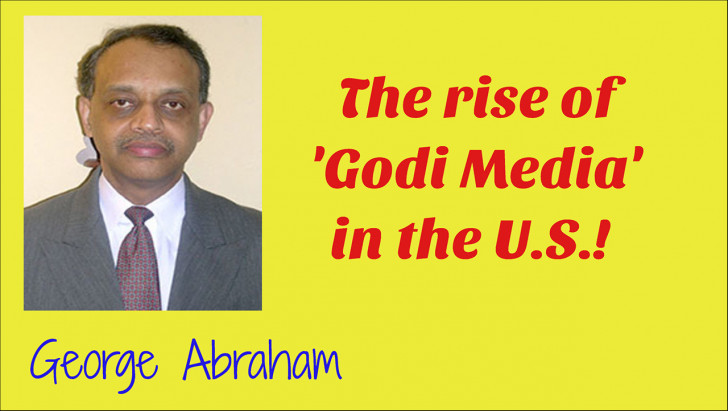 In a recent exchange with a leading publisher of an ethnic Indian newspaper, I inquired why he hasn't carried a news item on the Indian Americans protesting before the United Nations where Prime Minister Modi was addressing the General Assembly. The answer came swiftly back in a query whether the demonstration was anti-India! I responded in kind, saying protesting Modi policies does not constitute taking an anti-India stand. Unfortunately, that is the sad reality that the ethnic Indian media has fallen into.

A respected journalist recently told me that management chastised him for inviting me to an election debate before the 2019 elections in India to present an opposing point of view to the policies promoted by OFBJP leaders. Obviously, the forces who have taken control of the ethnic Indian media business using their money power, are under no illusion that there is a certain requiem in journalistic tradition to honor a diversity of points of view.

These forces do not misunderstand the role of the media, but rather, they appear to be deliberate in their efforts in promoting a particular agenda to influence the Diaspora in the U.S. Often, their agenda regarding India runs counter to the values and principles the United States holds dear, and oaths taken by many of them when they have renounced their Indian citizenships.

Media which is also dubbed as 'fourth estate,' refers to the watchdog role it plays in a functioning democracy. In the United States, the first amendment to the constitution 'frees' the press from government control or oversight. However, that freedom carries with it great responsibility as a guardian of people's interests.  There is no doubt that the ethnic Indian media must be held under the same standard dealing with issues of concern to them, whether that happens in the U.S. or India.

'Godi Media' is a term coined by journalist NDTV's Ravish Kumar, translating to "lapdogs' because they "sit in the master's lap, but they don't' bite as much as they yap". The New York Times reported that "Modi has shrewdly cultivated the media to build a cult of personality that portrays him as the nation's selfless savior." Government officials appear to be complicit in controlling the media narrative, cutting government advertising, and ordering tax investigations on outlets that do not toe the line. The corporate ownership of the media has enabled these power centers to remove the editors and journalists they disagree with. According to reporters without borders, India is now ranked 142nd on the global press freedom index, with censorships and disinformation on the rise. Consequently, the current administration has succeeded in mostly controlling the narrative of the national discussions.

Although the Diaspora is well-positioned to tap into as many available sources, including social media, Indian ethnic publications play a major role in disseminating news and information that directly impacts the community.  The community leaders rely on them greatly to promote events and celebrate various festivals.

According to the latest U.S. census, the Diaspora may account for five million Asian Indians who have come to these shores in the short span of the last five decades. If one looks at the demography based on religion, there is an even split between the number of Hindus and Non-Hindus who have settled down across the continent. Most Hindus profess to support democratic and pluralistic ideas and are opposed to a Hindu Rashtra for India.  How, then, did we end up with a pro-Hindutva media that promotes the philosophy of V.D. Savarkar rather than of Jawaharlal Nehru.

It is puzzling why the Indian Diaspora is a not vocal defenders of freedom, democracy, and fraternity as it is the largest group of economic refugees living around the globe seeking fairness, justice, and equal opportunity. We do aspire for religious freedom wherever we live and promote our culture and cuisine at every opportunity. At this point in time, we are indeed delighted to see that a few leading Congressmen in the House of Representatives are submitting a resolution to make Diwali a federal holiday. However, when Prime Minister Modi renamed 'Good Friday' into Digital Day and 'Christmas day' into a working day for the federal government in a country where Christian history dates to the turn of the first century, it was met with deafening silence on the part of the Diaspora as well as the media.

The recent government action canceling the OCI cards of some who have participated in protests supporting the farmers of India is a case in point where the media, except for a handful of courageous editors, has gone AWOL. Some media outlets who would make such a hue and cry at the slightest provocation against Indians in terms of verbal attacks or disrespecting a religious symbol would easily turn a blind eye towards serious violations of human rights and religious freedom in India. This duplicity is not only protecting the perpetrators of those crimes but also undermining the very concept of the shared value system of these two democracies.

The non-resident Indians have a long history of expressing their opinion in support or opposition to the government's policies of India as they have felt it as an obligation to help those they have left behind. That partnership has brought educational enlightenment and scientific advancement to a country in dire need of capital and technological skillset. Looking back in history, the Diaspora had vehemently disagreed with the government on occasions, such as the declaration of Emergency by then Prime Minister Indira Gandhi. The voice of its dissent reverberated across the globe, even resulting in sanctions against NRIs. If the Diaspora is counted on only to bring in the dough and then shut up, that partnership would soon vanish in the thin air.

In a recent conference in Chicago by a group of media personnel, the visiting journalists were reported to have voiced their displeasure with the Modi government trying to control the narrative in explaining its various policies to the public. However, the discussion should have been focused on how the Indian ethnic media here in the U.S. has mostly failed to uphold the basic journalistic principles by blindly following the whims of a regime with very little tolerance for freedom of expression.

If one examines the case of prime Minister Modi's recent visit to the U.S., the following scenario will become evident to any keen observer of the US-India relationship.  It appears that Modi was not accorded a warm reception in Washington, and the symbolism was not lost on anyone. There was neither a senior member of the U.S. government to receive Modi nor was the ceremonial carpet laid out for him as he set foot in the U.S.  He was also treated as a problem child by Kamala Harris, the first Asian Indian Vice-President ever to hold the office, who lectured him on the need to protect democracy. Then he met with President Biden, where a low-level U.S. official received him to the oval office and the same official escorting him back to his limousine. One needs to go back to the pages of history to see how Indian prime Ministers were received to understand the contrast fully. However, suppose one reads the Indian ethnic media, an entirely different picture is painted with throngs of people waiting for him at every turn, with a little hint of getting a cold shoulder from the top brass in the U.S. during the visit.

ASIANET may be the most popular channel in Kerala for news and analysis. However, their U.S. outfit behaves as if they owe their allegiance somewhere else. The sentiment of most of the Kerala community in the U.S. that believes in pluralism and democracy rarely gets reflected on their news reporting, often obfuscating their real concerns as regards the regressive policies of the Modi administration and its real impact on the lives of their fellow citizens. They prefer to have the video clips filled with 'feel good' events rather than showing visuals of hundreds of members of the Diaspora in front of the U.N. demanding fair treatment for the farmers in India!

There is an urgent need for honest journalism to speak the truth to power in India and within the Diaspora. The primary function of journalism is to connect, inform and educate the public. Unless the media stands firm and refuses to be stifled and intimidated, there is very little hope in preserving freedom and justice and demanding accountability from power centers. The Indian ethnic press in the U.S. bears an even bigger responsibility in creating open space and helping to stop the spread of division and hatred within the community. Anything less would be tantamount to a total abdication of their moral responsibility to the public!

(Writer is a former Chief Technology Officer of the United Nations and Vice-Chairman of the Indian Overseas Congress, USA)