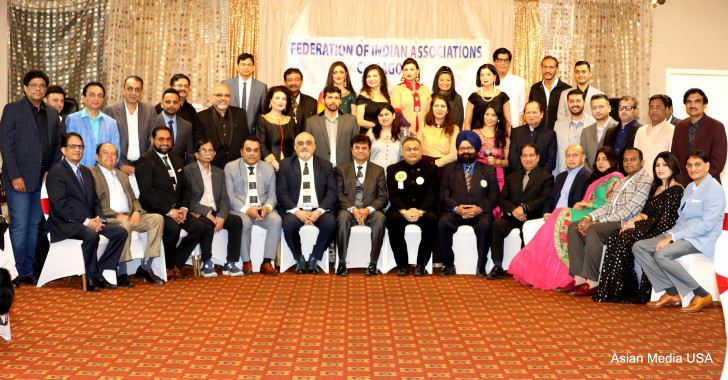 Chicago, IL: Federation of Indian Associations (FIA) hosted a welcome reception to unveil its comprehensive roadmap for 2022 & beyond replete with meaningful events that seeks to compliment and celebrate a multitude of community-centric program initiatives with emphasis on India’s festivals, community outreach, charitable causes, social, cultural, business, medical and other community- oriented events including addressing the emerging pandemic challenges at its annual board meeting held on Sunday, November 28, 2021 at the Big Suchir Banquets in Westmont, IL. The meeting was attended by the entire FIA team as a well as the advisory board members.

FIA’s General Secretary Richa Chand conducted the proceedings of the Annual Board Meeting for the year 2021-2022 and invited Founder President Sunil Shah for his opening remarks. Shah in his speech, outlined the successes behind the year 2021, listing the events conducted by the FIA and its team. He thanked the outgoing team for its hard work in putting together and conducting various India centric and Charitable events during the year. He also took the opportunity to welcome new members to team FIA. In a major announcement he declared that FIA would initiate an annual FIA Scholarship for deserving students starting from the year 2022.

Current President Dr. Kamal Patel in his speech, thanked the founding board, and the team 2021 for all the work put in to make the year a resounding success. From the Republic Day event in January 2021 albeit a Zoom Event attended by more than 350 guests headline by Kailash Kher the prominent Bollywood Singer, to the Holi Festival of Colors Event which was two pronged – one to celebrate the festival of Holi and two to collect funds to send to India as a donation for the fight against Covid and supply oxygen Concentrators, not to forget the grand Independence Day event to celebrate Azadi Ka Amrit Mahotsav.

Founding Members Onkar Sangha, Neil Khot, Rita Singh, Mukesh Shah, Dhitu Bhagwakar also took the stage thanking team 2021 and praising the work of the team in making the year a resounding success. Founding Member and Past President Neil Khot announced the formation of a Board of Trustees that would be seated with Past Presidents and announced the names of Ninad Daftari and Gurmeet Singh Dhalwan as the two past presidents being the trustees on this esteemed board.

The incoming President Hitesh Gandhi offered his view for the year 2022 and the plans to take the organization to new heights with events planned for Celebrating India’s Republic Day, Independence Day and Cultural events like Holi and Diwali. This year FIA Chicago will also host Medical Wellness Checkup Camp, Blood Donation Drive, Food Drive and Toys of Kids during the holiday season.

FIA Chicago was founded to bring Cultural awareness to the Chicagoland area and has now grown to serve the community by hosting many events for the community and helping the community grow and become one. FIA Chicago plans to take on projects like Job Fair, Entrepreneurship camps and Youth Leadership Development Skill Camps.