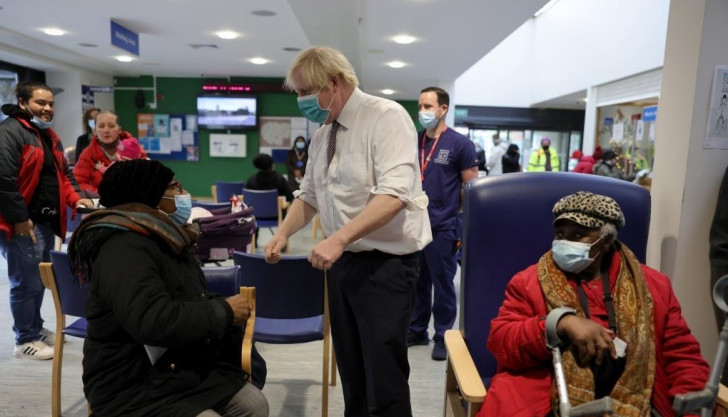 London, Dec 1 : British Prime Minister Boris Johnson said that everyone above 18 years of age will be offered a booster vaccine by the end of January and another lockdown is "extremely unlikely".

Speaking at a Downing Street news briefing on Tuesday, the Prime Minister said the rollout of booster programme will go in age order, and that there will be more than 1,500 community pharmacy sites in England offering the jabs.

"Temporary vaccine centers will be popping up like Christmas trees", adding that some 400 military personnel and the "jabs army of volunteers" will also help with the rollout, Johnson said.

A further eight cases of the new Omicron Covid-19 variant have been identified in England, bringing the total number of confirmed cases of the SARS-CoV-2 variant known as B.1.1.529 in Britain to 22, according to the UK Health Security Agency (UKHSA), Xinhua news agency reported.

The UKHSA said it is acting to get scientific information available as quickly as possible in order to inform the right balance of interventions to prevent transmission of the new variant and protect lives.

British Health Secretary Sajid Javid told the news conference that authorities are looking to establish any link to South Africa in the new England cases, but added we have to be "realistic" and there is "likely to be community transmission" of the new variant.

Britain registered 39,716 new Covid-19 infections, bringing the total number of coronavirus cases in the country to 10,228,772, according to official figures released Tuesday.

More than 88 per cent of people aged 12 and above in Britain have received their first dose of vaccine and more than 80 per cent have received both the doses, according to the latest figures.

More than 31 per cent have received booster jabs, or the third dose of anti-coronavirus vaccine.

To restore normalcy, countries such as Britain, China, Germany, Russia and the US have been racing against time to roll out Covid vaccines.