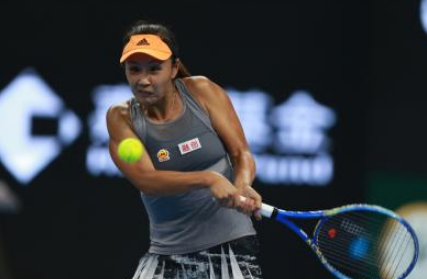 St Petersburg (USA), Dec 2
The Women's Tennis Association (WTA) has announced with immediate effect suspension of all WTA tournaments in China, including Hong Kong, till the country investigates the allegation of sexual assault made against a former senior politician by doubles player Peng Shuai in a full, fair and transparent manner.

Peng Shuai has not been seen around after the 35-year-old, one of China's most recognizable athletes, accused, in a social media post, former Vice Premier Zhang Gaoli of coercing her into sex. The post has since been deleted by Chinese authorities.

WTA administration and players have been in total support of Peng Shuai ever since screenshots of her social media post were shared on Twitter and the WTA has regularly demanded verifiable proof from Chinese government that Peng Shuai is "free, safe and not subject to censorship, coercion, and intimidation".

Chinese authorities have released videos of her at a restaurant and also arranged for a video call with senior officials of the International Olympic Committee (IOC), but WTA is not convinced, thus resulting in Wednesday's announcement in the suspension of all its tournaments in China.

Said WTA's chairman and CEO, Steve Simon, "With the full support of the WTA Board of Directors, I am announcing the immediate suspension of all WTA tournaments in China, including Hong Kong. In good conscience, I don't see how I can ask our athletes to compete there when Peng Shuai is not allowed to communicate freely and has seemingly been pressured to contradict her allegation of sexual assault."

"Given the current state of affairs, I am also greatly concerned about the risks that all of our players and staff could face if we were to hold events in China in 2022," said Simon in a statement.

WTA conducts around 11 major tournaments in China and Hong Kong annually and the suspension of these events means huge losses for the women's tour.

"When on November 2, 2021, Peng Shuai posted an allegation of sexual assault against a top Chinese government official, the Women's Tennis Association recognized t'at Peng Shuai's message had to be listened to and taken seriously. The players of the WTA, not to mention women around the world, deserve nothing less.

"From that moment forward, Peng Shuai demonstrated the importance of speaking out, particularly when it comes to sexual assault, and especially when powerful people are involved. As Peng said in her post, "Even if it is like an egg hitting a rock, or if I am like a moth drawn to the flame, inviting self-destruction, I will tell the truth about you." She knew the dangers she would face, yet she went public anyway. I admire her strength and courage," he said, accusing Chinese authorities of muzzling her voice instead of investigating her allegations in a free, fair, and transparent manner.

"None of this is acceptable nor can it become acceptable. If powerful people can suppress the voices of women and sweep allegations of sexual assault under the rug, then the basis on which the WTA was founded - equality for women -- would suffer an immense setback. I will not and cannot let that happen to the WTA and its players," he said.

He said WTA was ready to take the risk of suffering huge losses in this case.

"I very much regret it has come to this point. The tennis communities in China and Hong Kong are full of great people with whom we have worked for many years. They should be proud of their achievements, hospitality, and success. However, unless China takes the steps we have asked for, we cannot put our players and staff at risk by holding events in China.

"China's leaders have left the WTA with no choice. I remain hopeful that our pleas will be heard and the Chinese authorities will take steps to legitimately address this issue," Simon added.