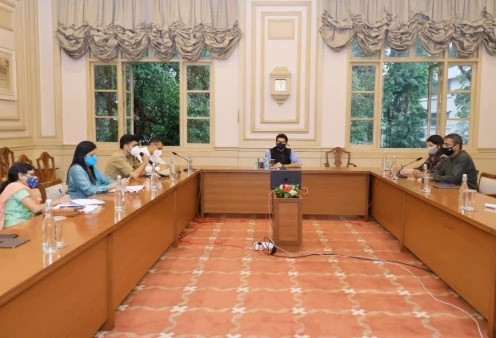 Mumbai, Dec 2
The government of Maharashtra and a delegation of the Local Organising Committee (LOC) discussed and reviewed the preparedness for the AFC Women's Asian Cup India 2022 on Thursday.

With only 50 days to go for the Asia's premier women's national team competition, Project Directors of the LOC, Ankush Arora and Nandini Arora updated Minister of Tourism, Maharashtra Govt Aditya Thackeray, who is also the president of Mumbai District Football Association (MDFA), on the preparedness for the tournament and elaborated upon the health and safety precautions being taken to conduct the tournament in a safe and secured manner, in the hindsight of the COVID19 pandemic.

Upon successful discussions on Wednesday, Thackeray said that the best foot is being put forth by everyone involved in the lead-up to the 12-nation tournament which will be played between January 20 and February 6 next year.

"Gearing up for the upcoming AFC Women's Asian Cup in Mumbai, Navi Mumbai & Pune, reviewed the preparations this afternoon. We are ensuring that COVID protocols are fully adhered to for the safety of the players, coaches, staff without hampering the experience of the game," Thackeray, posted on Twitter following the meeting.

"We are extremely pleased that preparations for the prestigious tournament is progressing as per the schedule and after meeting with our respected stakeholders, we are increasingly confident of hosting a memorable tournament. We would like to express our wholehearted gratitude to the Government of Maharashtra, the respective Municipal Corporations, the Police Departments, the Sports Authorities and every other stakeholder working continuously to ensure a smooth path to the showpiece event next year", the Project Directors said in a joint statement.

Hosts India have been placed in Group A along with China, Chinese Taipei and Iran. The remaining eight teams have been divided into two further groups. Australia, Thailand, Philippines and Indonesia comprise Group B. Meanwhile, Group C will see defending champions Japan being challenged by Korea Republic, Vietnam and Myanmar.