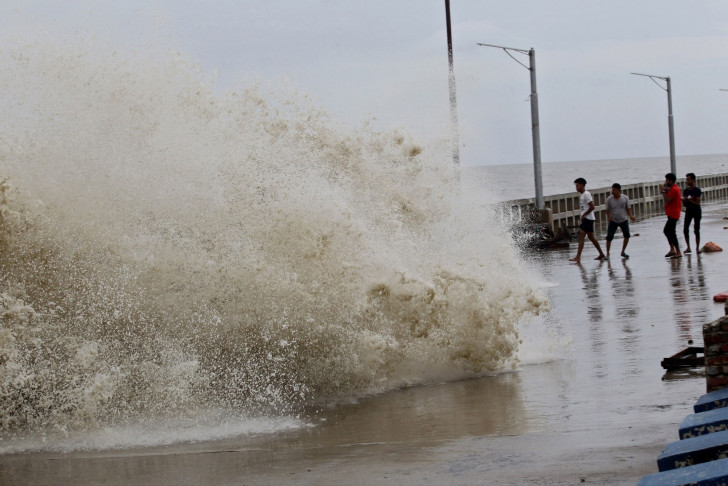 New Delhi, Dec 3 The Cyclone Jawad, that is headed to India's eastern coast on Saturday and Sunday, will witness wind speeds of 90-100 kmph with 90 kmph when it touches the coast near north Andhra Pradesh-Odisha on Sunday.

'Jawad' is a name given by Saudi Arabia and means generous, magnanimous.

"Gulaab se zyada, Titli se kam (More than Gulaab and less than Titli)," is how the Director General Mrutyunjay Mahapatra described the intensity of Cyclone Jawad (pronounced as Jowad) on Friday.

The Cyclone Gulaab, that came knocking in September this, year had maximum wind speeds of 85 kmph while Cyclone Titli of October 2018 had maximum pf 140 kmph wind speeds. "Jawad is little more intense than Gulaab and is definitely less than Titli," Mahapatra said at a media conference.

In West Bengal, Cyclone Bulbul two years ago had wind speed of 120 kmph. Cyclone Jawad, when it reaches the West Bengal coast, will be weakened and the wind speed would be 60-70 kmph. Jawad is not an extremely severe cyclone as Phani, Hudhud, or Phylin. "As at now, it is a severe cyclonic storm and we are expecting 90-100 kmph wind speed near the coast," he added.

Not all cyclones develop 'eye' of the cyclone, he said, adding: "Usually, severe to very severe cyclones develop the 'eye'. But we are determining the 'centre' with the help of satellite images; we have a lot of buoy observations, coastal observations, stratometers, sea surface winds we are observing. Also, all the Doppler Radars along the coast are actively monitoring the Cyclone Jawad."

As designated by the World Meteorological Organisation (WMO), IMD is one of the five Regional Specialised Meteorological Centres (RSMCs) for Tropical Cyclones set up across the globe. Each of these is given the task of issuing advisories for the geographical areas assigned by the WMO.

IMD issues advisories for tropical cyclones to 13 member nations along the entire Indian Ocean rim countries - India, of course, Bangladesh, Iran, Maldives, Myanmar, Oman, Pakistan, Qatar, Saudi Arabia, Sri Lanka, Thailand, the UAE and Yemen. In turn, these get to name the cyclones as per a protocol evolved more than a decade ago.