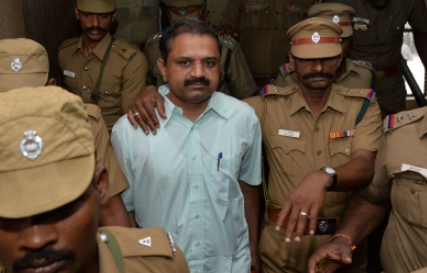 New Delhi, Dec 7
The Supreme Court on Tuesday said it is not keen on granting any further adjournments on the plea of A.G. Perarivalan, convicted for former prime minister Rajiv Gandhi assassination, seeking remission of his sentence.

Solicitor General Tushar Mehta, representing the Centre, contended before a bench headed by Justice L. Nageswara Rao and also comprising Justices B.R. Gavai and B.V. Nagarathna that he had to appear before other courts in part heard matters and sought an adjournment in the Perarivalan matter. He urged the top court to schedule the matter for hearing later this week.

The bench, however, said Mehta should have informed it about his schedule earlier.

Expressing its dissatisfaction with the request for adjournment, the bench told Mehta: "What do we do? If everything is adjourned... You should tell us early."

Senior advocate Gopal Sankaranarayan, representing Perarivalan, said his client has been in custody for 30 years, and added that some relief should be granted to him.

He submitted before the bench that the Tamil Nadu Governor's decision has not been placed on record.

After a brief hearing in the matter, the top court scheduled the matter for further hearing in January. "But, don't take any more adjournments!" it stressed.

In February, this year, the Union Ministry of Home Affairs had informed the Supreme Court that Tamil Nadu Governor has recorded that President is the competent authority to deal with pardon plea of Perarivalan.

In 2014, the top court had commuted his death penalty to life imprisonment on the ground of delay in deciding their mercy petitions. Perarivalan was sentenced to death for aiding in making the bomb, which killed Gandhi.

On various occasions, the Supreme Court had expressed its dissatisfaction over the pendency of the pardon plea of Perarivalan for over two years with the Tamil Nadu Governor. Perarivalan had moved the top court seeking premature release and remit of his sentence. He had also cited the recommendation made by the state government in 2018 for his release.