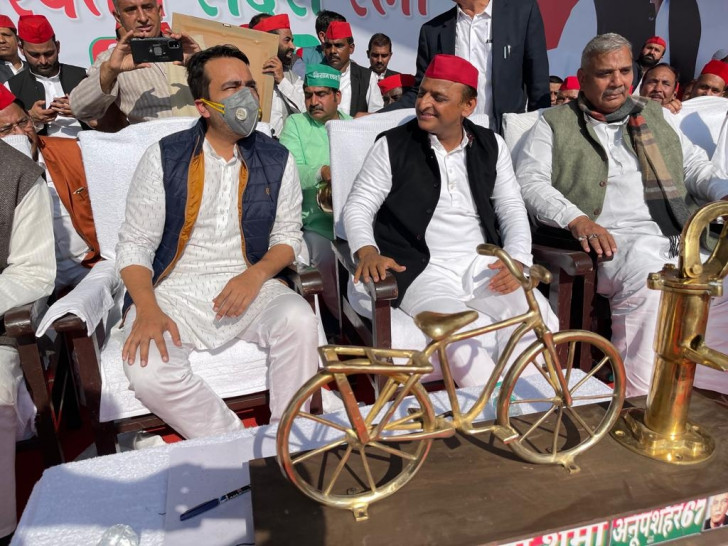 It was the first rally in which the Samajwadi Party and the Rashtriya Lok Dal (RLD) shared the stage together. Both Akhilesh Yadav and Jayant Singh Chaudhary of the RLD arrived at the rally together.

While addressing the rally, Akhilesh Yadav slammed the BJP and said that this 'Parivartan Sandesh' is not just a rally, but the power of the people to drive out the BJP government from Uttar Pradesh.

The SP chief said that he has promised to give jobs to one crore youth. According to the SP's poll manifesto, farmers will get 1.5 times the price of potatoes and sugarcane within 14 days.

Under the Pradhan Mantri Kisan Samman Nidhi Yojana, the farmers will be given Rs 12,000 every year. Old-age pension will be increased by three times, 50 per cent reservation will be given in job recruitments for women, he said.

An effective insurance scheme will be prepared for the farmers, while previous electricity bills of farmers and weavers will be waived and their next bills will be reduced by half, Akhilesh Yadav said.

While addressing the rally, Akhilesh Yadav also said that if the SP forms government, the amount for PM Samman Nidhi Yojana will be increased from Rs 6,000 to Rs 12,000. He also assured to increase the price of sugarcane.

RLD chief Jayant Singh Chaudhary also took a jibe at the BJP government, saying, "You have seen the condition of the double-engine government at the Centre and in Uttar Pradesh... a BJP MLA recently broke a coconut in Bijnor, but the road got damaged instead."

Chaudhary added, "I am announcing from this stage the alliance between SP-RLD. The double engine government of SP-RLD will come to power and take the state to new heights."

Raising the issue of farmers, the RLD chief said that farmers were attacked and insulted in the state, but no BJP leader uttered a word condemning the attacks.

Chaudhary said, "Yogi (Adityanath) starts talking about Aurangzeb, but ends up pointing at the exodus during the previous government. The youth are being forced to move to other states and look for jobs, but Yogi ji does not see this as exodus."

The RLD chief said, "When the SP-RLD government is formed in Uttar Pradesh, we will build a memorial for the martyred farmers in Meerut so that their sacrifices are remembered."