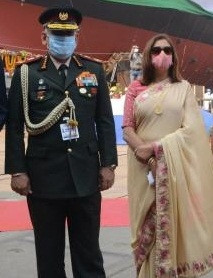 Chennai, Dec 9 The bodies of Chief of Defence Staff General Bipin Rawat, his wife Madhulika and three others have been identified, sources said on Thursday.

The other three bodies were of Brigadier L.S. Lidder and two pilots.

These five are among the 13, who were killed in the M 17 helicopter crash on Wednesday in Tamil Nadu. Group Captain Varun Singh, the Directing Staff at the Defence Services Staff College in Wellington, is the lone survivor of the ill-fated chopper

The other bodies were being sent to Coimbatore for further DNA testing, the sources added.

A wreath laying ceremony will be held at the Madras Regimental Centre in Tamil Nadu's Wellington, after which the bodies will be brought to Sulur airbase by road.

Earlier in the day, the data recorder of the chopper was recovered by a 25-member special team of Air Force officers led by Wing Commander R. Bhardwaj.

The IAF helicopter had taken off on Wednesday morning from the Sulur air base and crashed minutes before it was supposed to land at Coonoor.