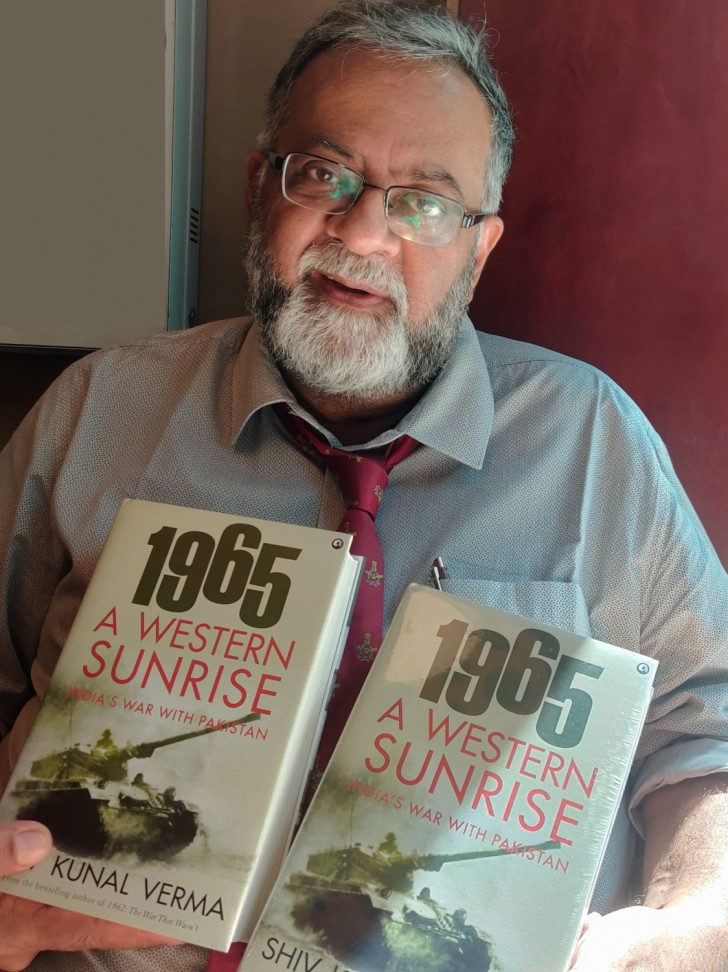 New Delhi, Jan 4 : General Ved Prakash Malik's endorsement of Shiv Kunal Verma's epic book, "1965: A Western Sunrise" is a show stopper in its own right. It's a classic case where some of the points being made by the former army chief, who was at the helm of affairs in 1999 when Pakistan's Northern Light Infantry, under the guise of the Mujahideen, ingressed into the Drass and Kargil Sectors, are perhaps as interesting as Verma's book itself.

Since Independence, for 75 years a lot of water has flown down the Indus and the Brahmaputra rivers. With India's northern boundary defined by the geographical entity of the Himalayas and the western frontier by the whimsical machinations of the British (the Radcliff Line), the public at large never really knew what happened in the bloody conflict with Pakistan in 1947-48, then with China in 1962, and then again with Pakistan in 1965 and 1971. The complete lack of any worthwhile objective writing on these conflicts reflected the void that existed in India's thinking when it came to understanding geo-politics and matters military.

As General Malik points out, Shiv Kunal is the son of Major General Ashok Kalyan Verma. Having been born and bred in the cauldron of the armed forces, Shiv Kunal's emergence as the country's premier military history 'sutradhar' is not surprising as "he not only has excellent sources but also the ability to separate the chaff from the wheat when it comes to looking into the fog of war and getting to what may have happened".

Shiv Kumar's previous book, "1962: The War that Wasn't", published in 2016, not only chronicled a terrible defeat, did not shy away from looking at both the civilian and military leadership, and calling a spade a spade. As Gen. Malik writes: "Shiv Kunal Verma's ruthless holding of a mirror to the leadership, which some might say is a bit opinionated, his immense research, his very detailed descriptions of each action with the background of the higher political and military leadership juxtaposed" makes his writing very interesting and his books very readable.

Every year, the Indian Army's Shimla-based Training Command, better known as ARTRAC, after researching the entire material available, suggest books that are 'prescribed' and 'recommended' for entrance examinations for various courses. In its latest circular to all commands dated October 20, 2021 (incidentally the 59th anniversary of the PLA's attack on 2 Rajput positions on the Nam ka Chu), "1962: The War that Wasn't" has been prescribed for the Defence Services Staff College (DSSC) and Defence Services Staff Course (DSTSC) for 2023-2030. Interestingly, Gen. Malik's "Kargil: From Surprise to Victory" also makes the cut, with "Blood on the Snow", written by Maj. Gen. Ashok Kalyan Verma, coming under the 'recommended' category.

Air Marshal Denzil Keelor who also has high praise for Shiv Kunal's two books, says: "The only reason why '1965: A Western Sunrise' is not on the list is that hadn't been released (at the time the list for 2023-30 list was drawn up). By far the most lucid and detailed account of the war, the book knits the political, the military and the personal aspects in a manner that the quagmire of events become crystal clear. These two books set the bar in military writing."

So, are the Armed Forces today more open to hard hitting, objective writing than before?

Probably yes, for earlier any criticism was met with either stony silence or resulted in counter-charges, the Army and the Air Force perhaps being the most sensitive of the lot. It is the complete lack of coordination and planning (in 1965) between Gen. J.N. Chaudhuri and Air Marshal Arjan Singh (the Army and Air Force chiefs at the time) that repeatedly riles Verma in his book. Gen. Malik echoes the sentiment.

"Shiv Kunal, in his narration, is highly critical of the military leadership for poor planning and operational conduct during the war, with most of the blame going to Choudhuri, considered 'an impetuous and unthinking Army Chief'. The disdain Chaudhuri had for the other two services was clear in his handling of affairs. Air Marshal P. C. Lal, who was the Chief of Air Staff (CAS) six years later, said that Chaudhuri treated the whole business of fighting Pakistan or China as 'his personal affair, or at any rate that of the army's alone, with the air force a passive spectator and the navy out of it altogether'," Gen. Malik says.

Can this acceptance of objective criticism spread to other forms of writing that focus on the defence establishments, or will some areas always remain closed to public perception?

There are multiple contentious issues, especially when it comes to internal security matters, where the defence forces instinctively pull back when something negative is perceived to tar their image, especially when it is related to AFSPA (Armed Forces Special Powers Act). Even if contemporary events require to be handled away from the glare of public scrutiny, other events that are now a part of history perhaps also need to be objectively revisited.

Krishna Kumar Candeth, whose uncle was an Army Commander in 1971, says in response to Gen. Malik's observations: "The book (on 1965) would've more than served its purpose if it leads slowly (beginning with these articles and reviews) to a re-examination of the 1965 war - the egregious mistakes that were made and which are quite likely to be repeated if that re-examination does not take place."

"Our military history," says Darshan Singh, the Chairman of Welham Boys' School in Dehradun who with Shiv Kunal's help has initiated introducing the subject at the school level, "has to be an integral part of our education system. Most importantly, it has to be shorn of jingoism and the students, be they be in schools or universities, need to be familiarized with the challenges we have been faced with as a nation. We cannot move forward unless we can look back and draw the lessons from our past, for almost everything has the nasty habit of coming back at us."

The question is, having set the bar, will Shiv Kunal's two books now inspire a new generation of writers - and a military hierarchy that will encourage its own junior officers to study our own past in this manner?

"I think we need to go beyond that and look at reaching out to various segments of society," says Pankaj P. Singh of Chandigarh's The Browser Library and Bookstore, who is venturing into publishing military history books under its BlueOne Ink imprint. "For a start, we are looking at translating both the 1962 and 1965 books into Hindi, so JCOs and men can also be brought into this loop. Language versions will hopefully be our next step. We are certainly looking at also expanding the coverage to other major events that have impacted the country's post-Independence history," he adds.

In the recent past, even the events relating to Doklam and Eastern Ladakh are shrouded in mystery. More than information, misinformation seems to be the order of the day.

The Kargil War, now 22 years old, remains the last major conflict and some questions, continue to remain unanswered. Past governments, and in some cases even the Army leadership, have coloured events the way they wanted to project them. Other writers, usually themselves having been key protagonists, have either written self-exonerating versions or built up narratives whose veracity can be questioned.

There are umpteen cliches about history repeating itself and not learning from history. Lessons can only be drawn if we are willing to face the reality of what happened - and we must remember that in the rear-view mirror of time, objects are a lot closer than we think.