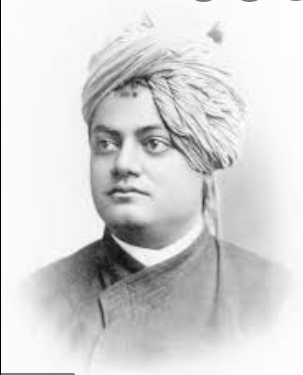 As we celebrate the birth anniversary (12th January) of the saffron robed monk who projected spirituality of Hinduism, the diversity and syncretic nature of India, it is very reassuring. His teachings are in total contrast to the present scenario, where many saffron robed are promoting hate and inciting violence in the name of same religion. Swami Vivekananda, the legend who conveyed the essence of Hindu religion as humanism and love; in his speech in Chicago will remain a landmark in times to come.

He could make impact as he courageously put forth the great values of Hinduism while underlying the inhuman practices prevalent in the name of the same religion. Sunil Khilnani (Incarnations, page 305) quotes a valuable saying of his, talking of Hindu religion Swamiji says “No religion on earth preaches dignity of humanity in such lofty strains as Hinduism, and no religion on Earth treads upon necks of the poor and low in such a fashion as Hinduism.” For him poverty and caste system were the curses which needed eradication. In tune with that he sees God in the poor, Daridranarayan, and eradication of poverty and restoring dignity to the untouchables becomes his central concern.

He did not see that religions are in conflict as he picked up values of meditation from Buddhism. For him knowledge was not restricted by boundaries and so for him Western science and rational philosophy were to be accepted and respected. He equally upheld the organizational energies of American social reformers. He was out to reconcile the best in human traditions irrespective of native or ‘Foreign’, and so Hinduism, rationalism and social radicalism were the ideals which he synthesized in his understanding and practice. While we are out to make temples and statues, he was against idol worship as was propounded by Brahmo Samaj.

Unlike many; for him Hinduism was not to be mixed with politics. He had moved the length and breadth of country and knew the deeper syncretism prevalent in our country. While Hinduism’s blend with politics was based on ‘Hate other’, Vivekananda’s Hinduism was seeped with love and unity of religions. While opposing the unwanted social practices prevailing in society in the name of religion, he called for rational thinking which may go against blind faith and dictates of priesthood.

While we are witnessing the phenomenon of love jihad to control the lives of women, he stood for freedom of women. And as we are currently made to look down on movements like farmers movement, he saw the contribution of struggles of people coming together for their interests, like workers movement in America contributing to betterment of workers conditions.

When one sees the prevailing atmosphere where a social common sense has been created against Islam, Muslims and spread of Islam in India, his understanding about diversity in India comes as a breath of fresh air. His understanding is for promoting amity in the society. Rather than looking at Muslims as aliens who attacked Hindu culture, he says, “Our mother land is the land where confluence of two great traditions-Hinduism and Islam-has taken place. Make Vedas the brain and Islam the body of this land. In my inner self I dream of such an integrated India.” (Dr. Dattaprasad Dabholkar, Shodh Vivekanadacha, endnote 41).

While we are witnessing the tragedy of violence and promotion of hate in the name of Religion, he saw God as one “May I be born again and again and suffer thousands of miseries so that I may worship the only God that exists, the only God that I believe in, the sum total of all souls- the miserable and poor of all races, of all species.” (Volume V/Epistles-First Series/LXXVIII/ Mary Hale, 9July 1897)

While currently lot of efforts are being made to hide the source of caste system under the carpet, he frankly wrote, “I have no doubt that according to the ancient view in this country, caste was hereditary, and it cannot be doubted that Shudras used to be oppressed…(Volume Vi Epistles-second series/Sir, 17August 1889)

For him the diverse religions are no obstacle, as he sees religions as the path for attaining liberty and cessation of misery. One should have freedom to choose one’s path and live in mutual respect with other religions. In the atmosphere of present dominating Islamophobia, globally and more at home the sage teaches us, “If ever any religion approached to this equality in an appreciable manner, it is Islam and Islam alone. ((Volume 6/Epistles-Second series/CXLII/ Sarfaraz Hussain, 10 June 1898)

Currently social energies are being diverted to intimidate religious minorities. Muslims are being targeted for having spread Islam through sword and Christians for converting through force, fraud and allurement. He clarifies the real cause of conversions in tow of his letters, one to Pundit Shankarlal of Khetri (20th September 1892 and another to Haridas Vithaldas Desai in November 1894 (Volume 5/Epistles-First Series/II, Volume 8/Epistles-Fourth series Nov 1894, respectively). In these letters he points out, “Religious conversions have not taken place because of atrocities of Christians and Muslims, but because of atrocities of upper caste.”

In matters of choice of food also he was very rational to point out that “We leave everybody free to know, select and follow whatever suits and helps him…Each is welcome to his own peculiarities and has no right to criticize the conduct of other.” Volume 4/Writings: Prose/What we believe in, 3rd March 1894) While he had no issues with beef he pointed out that cow meat was consumed during the Vedic period. It was also the object of sacrifice in the Vedic rituals. While speaking to a large gathering in the USA said: “You will be astonished if I tell you that, according to old ceremonials, he is not a good Hindu who does not eat beef. On certain occasions, he must sacrifice a bull and eat it.” (cited in Swami Vivekananda, The Complete Works of Swami Vivekananda, Vol 3 (Calcutta: Advaita Ashram, 1997), p. 536.)

It is obvious that those who have iconized the legendary Swami are totally against his teachings. He is for eradication of poverty, for restoring dignity of poor and downtrodden, is opposed to caste and is for a Harmony amongst all the religions. Wish we can honestly follow his teachings rather than pursue aggressive politics of Hate in his name.