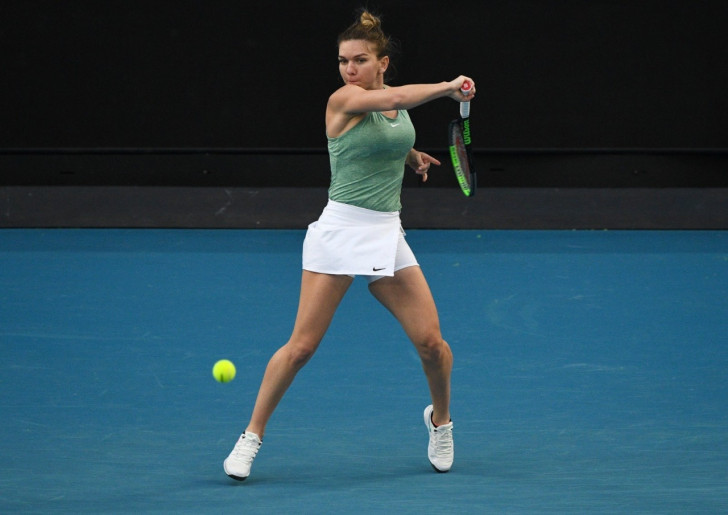 Melbourne, Jan 22
Former Australian Open finalist Simona Halep of Romania advanced to the fourth round of the opening Grand Slam of the year for the fifth straight year with a 6-2, 6-1 victory over Danka Kovinic of Montenegro, at the Melbourne Park on Saturday.

Also former semifinalist Elise Mertens of Belgium advanced to the last-16 with a 6-2, 6-2 win over Zhang Shuai of China.

With Saturday's victory over Montenegrin Kovinic, Halep bettered her season's record to 8-0 and her record in the third round of Grand Slams to 21-3. The Romanian has won all six sets she's played at the Australian Open so far and has only lost 12 games.

Against Kovinic, Halep won eight straight games from 2-2 in the first set to take command of the match. Kovinic, a three-set winner against qualifier Jang Su-jeong of South Korea and US Open champion Emma Raducanu to become the first player from her country to reach the third round at a Grand Slam, held from 30-30 to stop the streak, and Halep denied her an opportunity to break for 2-2 before winning the last four games.

"It was a great match," Halep was quoted as saying by wtatennis.com after the win. "I think I played good tennis. She was a little bit tired and exhausted, but I'm pleased with the way I played. I feel good to be in the second week."

Elise Mertens has never lost before the third round of a Grand Slam since reaching the semifinals of the 2018 Australian Open. On Saturday, the Belgian reached the fourth round or better eight times with here easy win over Zhang Shuai.

The No.19 seed needed just 70 minutes to defeat Zhang, a win in which she broke serve five times. She advances to a meeting in the last 16 with No.27 seed Danielle Collins of the US, who won a three-setter against Danish teenager Clara Tauson from a set and a break down.

"To win is always a good thing. Most of all, I'm pleased about my performance. I think I served pretty well, and that made my service game a bit easier," Mertens said after the victory.

"I think it was very hot today, and the balls were flying a little bit, so I think I controlled that pretty well. She was making a bit more mistakes than she used to maybe, but I think overall, [it was] a consistent match for me."