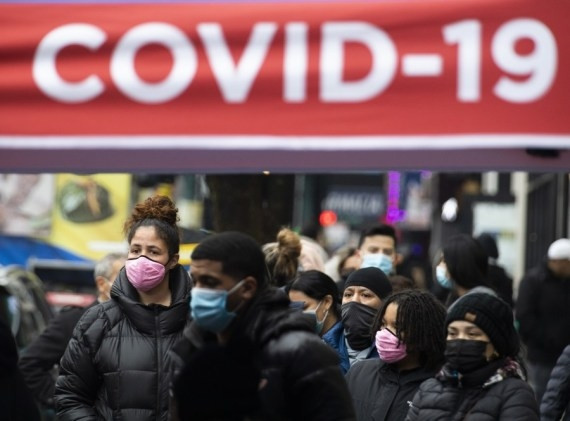 New York, Jan 26
The US has started to distribute free N95 masks while a clinical study has been launched to evaluate a specific vaccine targeting the rampant Omicron variant of Covid-19.

Free N95 masks are now available at some US stores as part of the White House's plan to hand out 400 million of them from the Strategic National Stockpile. Three free N95 masks will be available for each adult, federal officials said.

Most major pharmacy chains are expected to start giving out masks later this week. Walgreens spokeswoman Alex Brown said she expects the first stores to begin offering the masks on Friday, according to The Washington Post (WP).

In preparation for the rollout, the Centers for Disease Control and Prevention (CDC) has provided its most explicit guidance on the protection afforded by different types of masks. Well-fitting N95 masks "offer the highest level of protection."

The seven-day average of the total number of people in US hospitals with confirmed or suspected coronavirus declined for the fourth consecutive day to 156,042 on Monday, according to data from the Department of Health and Human Services.

The fast-spreading Omicron variant of the virus had driven case numbers in the US to record highs at the start of January and hospitalisations with the disease it causes have in recent weeks exceeded the number when Delta was dominant, Xinhua news agency reported.

While some early hot spots where the new variant took hold have seen steep fall in cases, "scientists are still unsure about the reasons behind these changes of direction, which in some cases have been followed by renewed rises," reported The Wall Street Journal.

Data from the CDC showed 41,511 Covid-19 cases among nursing home residents through the week ending January 16, far above any week during last winter's surge. Cases among nurses and other staffers doubled the previous peak in December 2020.

Meanwhile, deaths in nursing homes remain far below the surge that killed tens of thousands of residents in the spring and winter of 2020 before the Covid-19 vaccines were widely distributed, but the numbers have started to climb again, with 988 nursing home residents dead the week of January 16.

"The alarming rise in cases highlights the need for sustained vigilance to immunise and boost nursing home residents and staff," reported USA Today on Tuesday.

The existing vaccine was developed to target the original or "ancestral" strain of Covid-19. While three shots appear to provide some protection against Omicron, the vaccine, called Comirnaty, is not as effective as it was against earlier strains, said a USA Today report.

"This study is part of our science-based approach to develop a variant-based vaccine that achieves a similar level of protection against Omicron as it did with earlier variants but with longer duration of protection," BioNTech CEO and Co-Founder, Ugur Sahin said in a statement.

Virus-fighting antibodies capable of blocking the Omicron variant persist four months after a third shot of the Pfizer-BioNTech coronavirus vaccine, according to a study published on a preprint server on Saturday, giving a first hint about the durability of coronavirus vaccine protection, reported WP.

"That really shows that at least up to four months, post-dose three, there is still substantial neutralising activity against Omicron," said Pei-Yong Shi, a microbiologist at the University of Texas Medical Branch in Galveston, whose team did the tests of antibodies with Pfizer scientists.

"A key line of immune defense remaining intact," said the report, noting that "the laboratory study suggests a fourth shot may not be needed right away -- a question that has caused anxiety for people wondering if and when they would need to get another booster."