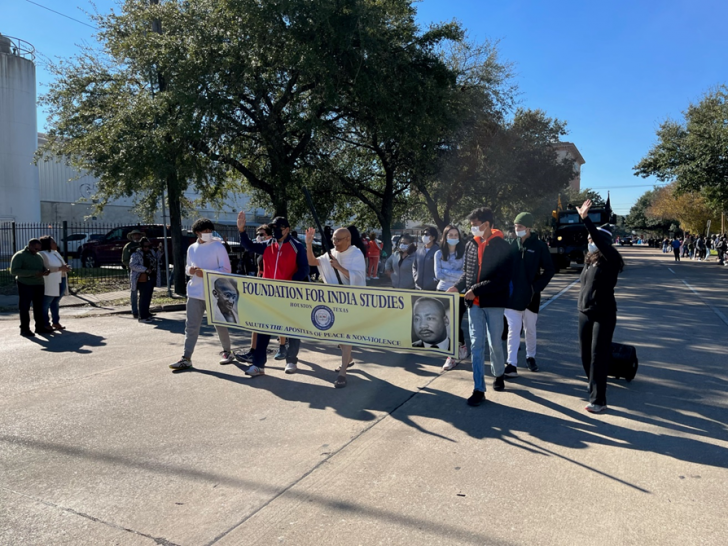 On January 17, 2022, members and supporters of the Foundation for India Studies (FIS) braved the morning wintry weather and walked in the 28th Martin Luther King Jr. Grande Parade held in midtown, Houston.

FIS, a 15 year old organization, has routinely participated in MLK parades for 10 years and also won the paarde’s Grand Marshall Award in 2015.

FIS’s participation in the MLK parades was to pay homage to the late civil rights leader, Martin Luther King Jr. who had adopted Mahatma Gandhi ji’s methods of passive resistance and non-violence in his struggle to achieve equal civil rights for the Black community, thus enabling a permanent bondage between people of America and the people of India. This relationship is expected to endure the test of times for many generations to come.

The theme of this year’s MLK parade was aptly named “Social Inclusion” referring to the oppression and inequities experienced by the communities of color particularly the Black community.

Despite the resurgence of Covid-19 Omicron cases, the spirit of MLK Jr. prevailed throughout the parade which saw enthusiastic participation by numerous college, and school kids marching alongside bands and floats. Organizations like the NASA and ROTC also participated.

The organizers restarted the parade this year after suspending it last year due to Covid-19.

FIS Event chair Mr. Sudhakar Tallavajhula said, all student participants will be presented with Certificates of Appreciation for rendering help in the parade walk. He was supported by the student co-chairs, Anand Morales and Nishant Revanur,

Manav Vishwanath and Netra Tallavajhula, helped plan the event and assisted in organizing other students to carry the FIS banner.

In the spirit of unity in diversity, FIS was joined by middle and high school students from the greater Houston area.

FIS Founder and Chairman, Krishna Vavilala, led the group; dressed like Gandhi ji, a trend he started in 2006 which is now followed by others. As a nine year old boy, Mr. Vavilala had experienced the aura of Gandhi ji in person in his native town, Rajahmundry and later on as an immigrant in Houston had proposed and served as the Project Chair of the Gandhi statue project in the Herman park (2003).

Spectators of the MLK parade stood on the curbside and cheered for the students, exclaiming phrases such as, “Peace!” or “Non-violence” or “Gandhi”. It was a wonderful experience as all the participants in the parade had the chance to recall their memories of two great leaders who influenced radical differences that shaped society for the better today. Mahatma Gandhi Ji was an Indian lawyer and nationalist who practiced passive resistance to achieve independence for India from British colonial rule and his non-violent actions inspired many movements across the globe. Though the two leaders had never met, Dr. King was one of the earliest adopters of Gandhi’s non-violent civil disobedience philosophy. Dr. King is famously quoted as stating that: “If humanity is to progress, Gandhi is inescapable. He lived, thought, and acted, inspired by the vision of humanity evolving toward a world of peace and harmony. We may ignore him at our own risk.” Dr. King saw through on Gandhi’s legacy of achieving a better world and is today most remembered for his prominence in the American Civil Rights Movement, which eventually brought an end to legalized racial discrimination and segregation in the United States.