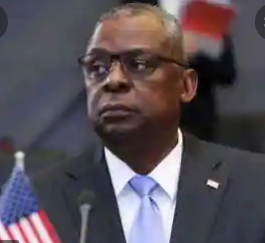 Washington [US], January 29 (ANI)
The United States has put its troops on "high alert" and hasn't "actually moved any troops" in response to the buildup of Russian troops on Ukraine's border, said US Defense Secretary Lloyd Austin on Friday (local time).
"We put troops on higher alert. And the second point that I would make is that even if and when we do move troops, the purpose of those troops deploying would be to reassure allies or directly in support of [the North Atlantic Treaty Organization] both. So I think that, again, before we make any decisions on readiness or movement of troops, we always take those things into mind ... the impact on other leaders," CNN quoted Austin as saying. Chairman of the Joint Chiefs of Staff Gen. Mark Milley also said the US is "increasing our readiness levels."
Earlier in his remarks, Milley said that "there is a small contingent of US and NATO advisers and trainers currently in Ukraine. The United States has zero offensive combat weapon systems, nor any permanent forces nor bases in Ukraine," CNN reported.
"Our role is limited in that we help train, advise and assist with tactics, techniques and procedures. We participate in institutional development with the Ukrainian Ministry of Defense. As the secretary of defense has noted, we continue to provide military material support to Ukraine along with many other countries from NATO. And we are ready, capable and prepared to uphold our obligation under treaty to NATO. As mentioned by the secretary, an attack against one NATO ally is an attack against all," he said.
Milley also said that "we strongly encourage Russia to stand down" and to pursue a resolution regarding Ukraine "through diplomacy."
Milley further stated the troop movements from Russia along the border with Ukraine and into Belarus are "different" from what the US has seen "in recent memory.
"It does feel different," Milley said, adding "This is larger in scale and scope in the massing of forces than anything we've seen in recent memory, and I think you'd have to go back quite a while into the Cold War days to see something of this magnitude," CNN reported.
"They do annual exercises, and we watch those closely. But this is different. So, we'll continue to monitor very, very closely. But yet it does feel different," Milley said.