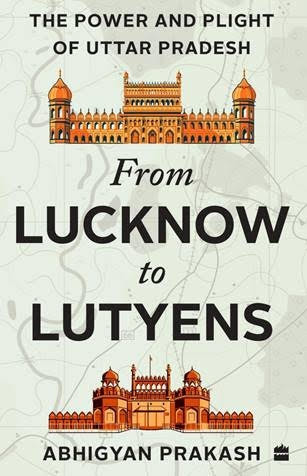 New Delhi, Feb 2 : With a population that would rank it the fifth in the world if it were a country, Uttar Pradesh has undoubtedly been India's most politically important state since Independence. It sends the highest number of members to Parliament and has the biggest legislature in the country. It also has to its credit most of India's Prime Ministers.

And yet, despite being home to the dynasties and bastions of some of the biggest names in Indian politics, it has lagged behind several states. With its clear and decisive imprint on national politics, UP also reflects some of its worst ills: from casteism and using religion as a political plank to manoeuvring for power and criminalization in politics.

"From Lucknow to Lutyens" (HarperCollins) relates the fascinating story of Uttar Pradesh in post-Independence India and the intertwined fortunes of the two, as the state votes in the seven-phased elections from February 10 to March 7 to the 403-member assembly that will decide whether Chief Minister Yogi Adityanath will break the jinx of no incumbent party returning to power in more than 30 years.

"Born in Banaras and bought up in Lucknow, naturally this book has my emotions and closeness to my heart regarding Uttar Pradesh. The concerns that I talk about in this book have been there with me for a very long time," says the author, Abhigyan Prakash.

"Having reported on and analyzed both UP and national politics for over two decades, it has always puzzled me, despite its enormous political presence and clout sending to Delhi the maximum numbers of Prime Ministers. It lacked growth it should have, far from realizing its full potential. This book is my attempt to dive into those pertinent questions and understand the many facets of the answer," the author adds.

"As UP heads to the polls in less than two weeks, it is a good time to understand the wider context in which the politics of the state plays out. In a sense, the current events in the state link back to patterns and trends that have prevailed for decades: the rise and decline of parties, the growth of caste as a decisive factor, leaders switching sides on the eve of elections, religion as a political plank, and so on," says Siddhesh Inamdar, Executive Editor, HarperCollins India.

"Abhigyan Prakash, with his extensive experience of analysing all matters UP, puts the state in that broader perspective for lay readers as well as political observers alike. This is a book we are delighted to be publishing and hope it will make a valuable contribution to the debate on the road ahead for UP for a long time to come," Inamdar adds.

Abhigyan Prakash is an award-winning senior journalist and columnist and has been an iconic frontline face pioneering news television in India. In a career spanning over two decades, he has hosted many flagship shows for NDTV as one of its key editors and has reported on and analysed UP and national politics. Currently, he is Senior Consultant, ABP News, and its national affairs expert.