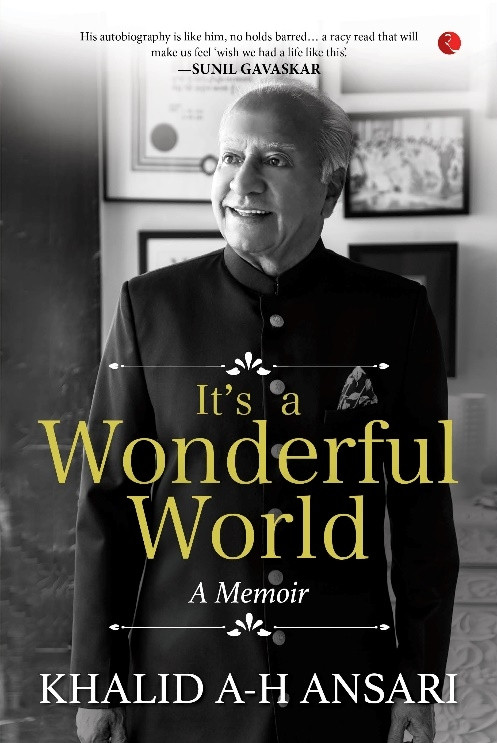 
"What started out as a biography has perforce taken the avatar of a memoir. I sincerely hope that despite my best efforts, the reader will not be bored to tears but on the contrary, enjoy this tale of the ‘gadha' (donkey) who thinks he is a ‘pehelwaan' wrestler", Ansari writes in "It's a Wonderful World" (Rupa), harkening to an Indian homily – ‘Jab Upar Wala Meherbaan To Gadha Pehelwaan' (When God smiles kindly, the donkey thinks he's a wrestler).

"In these memoirs, I have tried to present a cocktail of some ‘gyan' (wisdom), dollops of unserious but hopefully enlightening personal anecdotes, frothy bon mots, ‘gup-shup' (natter) and news.

"Most of all, I have endeavoured to make this a fun book with a serious underpinning of personal tough-as-nails experiences, from which readers will benefit, hopefully," Ansari writes.

Why the donkey analogy?

"So, why not make the hapless donkey, my alter ego," he counters, adding: "Why not make him instead of me the metaphorical raison d'etre – the purpose – of this tale? After all, is it not a timeworn belief that we are all the makers of our own destiny?"

The memoir is a broad, multi-faceted sweep of events from Ansari's birth in the poverty stricken Madanpura neighbourhood of South Bombay (now Mumbai) to a father who started life who started life as an orphan and a mother from a penurious family and went on to start Sportsweek, the leading sports weekly of its time, and the afternoon daily Mid-Day, and has authored four books on cricket, including a biography of Sachin Tendulkar. He was also the Chairman of M.C. Media Ltd, whose activities included FM radio broadcasting (a joint venture with BBC) in eight Indian cities.

Now in retirement, he and his wife run the Khalid and Zeyna Ansari Foundation which funds social welfare initiatives for the girl child (higher education, vocational training, nursing, computer training, hotel management) in slums and depressed sections of the society. It also conducts eye camps in Mumbai and Pune, funds cancer treatment and cochlear ear transplants and is involved in animal welfare.

"There's no business acumen in my genes that I know of, going back at least to my grandfather, who was a teacher," Ansari writes. "As I've always maintained with reference to myself, that a barber only knows how to cut hair. I have known only how to start publications not to sustain them in the long run. For me, the latter are alien functions to be discharged by superior humans: whiz-kids accountants and differently wired financial geniuses."

Nor did he even learn the rudiments of business and commerce in his educational career.

"Whatever little success came my way in my quixotic business undertakings was the result, very largely, of either accidental, albeit apt, timing, being at the right place at the right time, and sincere, devoted hard work by my colleagues, all of which bring me back to the...mischievous Donkey.

"But this Donkey is also two-faced and capable of delivering a lethal kick at the most unexpected time and for reasons known only to himself," Ansari writes.

"Basically, I have been lucky to never hanker after money – that ugly five-letter word which, through history, has been the root of all evil."

Admitting that he does enjoy the good things in life and is "grateful to the One Above for making the good life in the Aristotelian sense of the word possible for me", Ansari adds: "But overall, reaching my destination my way, with minimal, perhaps foolish, disregard for money in an essentially business endeavour, has been exhilarating."

Starting with Sportsweek and then Mid-Day (and its allied publications, "the thrill of the chase was infinitely greater than winning the prize", he writes.

"As long as ‘gaadi chal rahi thi (as long as the vehicle was running), I had neither the time nor the patience to check the engine. The ride was all-important. As long as my ventures were keeping their heads above water, I didn't worry about the lurking dangers beneath the surface. Profit, the be-all-and-end-all of most commercial activity, was my least concern.

"Espousing causes, fighting for principles I cherished (right or wrong!), taking on the big boys, rocking the boat, cocking a snook at the established market leaders made for an indescribable high, not the balance sheet," Ansari maintains.

For the most part, "I just refused to see the wood for the trees, didn't know, or wished to know, top line from bottom line, profitability from liquidity. Despite dire warnings from accountants and auditors, I wilfully refused to see the looming dark clouds of disaster: I was living in a haze even as the businesses hurtled towards financial apocalypse", he writes, crediting his son Tarique for being the guardian of the family's financial stability and injecting fiscal discipline "into an adventure that was fast careening into misadventure".

In conclusion, Ansari believes that India is showing "unmistakable signs of emerging out of (an) Covid-induced purgatory and heading towards serendipitous Elysian fields. On this sunny note, this Donkey would like to bray a hopeful ‘munh mein ghee, shakkar' (may there always be sweetness in your mouth).

"The future looks rosy, indeed. Yes, it is indeed a wonderful world!"