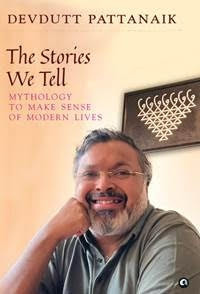 "Myths are usually embedded in sacred stories, and so we look to these sacred stories to stitch together a narrative of how many of our ancestors thought - from the mantras in the Vedic tradition, to the bardic suta parampara, as seen in the Ramayana, Mahabharata and Puranas; and the Jataka and Jain tales," Pattanaik writes in "The Stories We Tell" - Mythology To Make Sense Of Modern Lives (Aleph) - 72 stories from India's rich treasure of myths and legends that has its origins in his "Teatime Tales" webcast in 2020, from March 21 to May 31 during the early days of the lockdown to combat Covid-19.

In the book, he goes further afield - to Arabian, Greek, Roman, Egyptian and Norse myths - and even explores how myths from the Islamic and Christian worlds changed on Indian soil, "just as myths from Buddhism changed in China and elsewhere".

"What you will realise is that some feelings are felt everywhere," Pattanaik writes - reinforcing the belief that no matter where you are from, the world is, indeed, one.

His purpose is two-fold.

"First, use the Puranic framework of desha-kala-guna (geography-history-attributes) to discuss various topics in mythology. This is to remind you that all stories exist in a context. The ideas may be timeless but the stories are not. Stories change over time, over space, and with people who transmit them," the author explains.

"Secondly, use a 'post-structuralist' framework to think about myths. This simply means I don't care much for watertight categories and strict labels...labels and structures, while helpful, are also limiting," Pattanaik writes.

Noting that the purpose of mythology is different from history, he writes: "History is a record of the past. Mythology explains how cultures imagine the world, and their past.

As for parables, these are "prescriptive, while mythology is structural, about origins and organisation of nature and culture, in which parables may be located", the author states.

The stories in the book are arranged into a variety of themes, including 'Apsara', a reflection on the portrayal of women in ancient texts; 'Karma', 'Justice', and 'Appropriation or Exchange', which show how our modern ideals of justice have been shaped by ancient scriptures; 'Unconditional Love', which is an exploration of the parity that must exist between loving partners; and 'Devas and Asuras', which illustrates how the binary of right and wrong is anything but black and white.