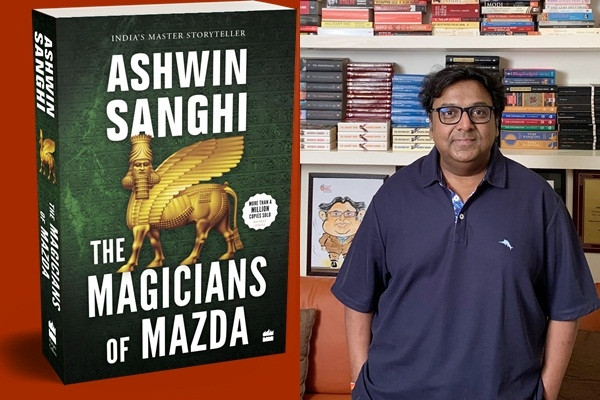 New Delhi, April 21 : Notching up a major success, HarperCollins on Thursday announced the acquisition of "The Magicians of Mazda", the keenly anticipated new book by bestselling author, Ashwin Sanghi - Indias master storyteller with more than a million copies of his books sold in print in English and other Indian languages -- that will be published in May.

The book is the seventh in the author's chart-topping "Bharat Series".

"The Magicians of Mazda", an epic saga in the author's signature style of merging fact with fiction, promises to be a roller-coaster read for fans of the author and mythological thrillers. It is a testament to the author's unending spool of imagination deftly woven with deep insights and research into a fast-paced plot that travels through time and history, taking the reader along on a thrilling ride.

A fleet of boats dock at the port of Sanjan in Gujarat in 720 CE. They carry eighteen thousand frightened souls fleeing the cruelty of Iran's Umayyad Caliphate. Chanting Sanskrit-like prayers, the high priest consecrates a sacred fire to thank their god, Ahura Mazda, leading them to a new home and hope. He uses a mysterious substance to spark the flame, but few know of its miraculous properties or provenance.

Centuries later, Parsi scientist Jim Dastoor is abducted from his Seattle laboratory and whisked away to Tehran. The Ayatollah believes Dastoor is the key to uncovering the ancient relic known as the Athravan Star and his men will do anything to possess it, even murder.

From the ancient ruins of Persepolis to the Taliban camps of Afghanistan, from the womb of an Udvada fire temple to the icy mountains of Kashmir, from the dreadful coffin cells of Tehran to the deathly calm of Diu's Tower of Silence, Dastoor and his historian wife, Linda, are sucked into a terrifying chase across vividly changing landscapes.

Deftly navigating between time and geography, "The Magicians of Mazda" travels backwards, through the epochs of Islamic jihad, Macedonian revenge, Achaemenid glory, messianic birth, Aryan schism to the Vedic fount from where it began.

This is Ashwin Sanghi's most gripping and provocative novel yet.

"I am delighted that my 'Bharat Series' - including the previous six titles as well as my latest, 'The Magicians of Mazda' has found a new home at HarperCollins India. Ananth Padmanabhan, Udayan Mitra and Swati Daftuar are fantastic people to work with and I am grateful to them for having pulled out all the stops to get this book out to my readers in record time," Ashwin Sanghi said.

Ananth Padmanabhan, CEO, HarperCollins India, said: "I am a big fan of Ashwin's writing, and we are very delighted that HarperCollins will now be the home for Ashwin's stupendous Bharat Series. Ashwin is India's foremost writer of adventure and has entertained millions of readers with his incredible storytelling and imagination, spanning time and geography. 'The Magicians of Mazda' is a roller coaster that yet again sets the bar very high."

Swati Daftuar, Executive Editor, HarperCollins India, said: "We are so very pleased to welcome Ashwin to HarperCollins India. With every book in the 'Bharat Series', he brings us something quite fantastic, and his latest, 'The Magicians of Mazda', is really his best yet. The careful research behind every book, the thrill and pace of a taut, beautifully crafted adventure -- all of it proves without doubt that he truly is a master storyteller."

Ashwin Sanghi's six previous books in the "Bharat Series", that blend the ancient with the modern, myth with history, spirituality with science, philosophy with theology and politics with anthropology, are

"The Rozabal Line", "Chanakya's Chant", "The Krishna Key", "The Sialkot Saga", "Keepers of the Kalachakra", and "The Vault of Vishnu".

In addition, he has authored two New York Times bestselling crime thrillers with James Patterson, "Private India" (sold in the US as "City on Fire") and "Private Delhi" (sold in the US as "Count to Ten". He has also co-authored several non-fiction titles in the "13 Steps Series" on Luck, Wealth, Marks, Health and Parenting.