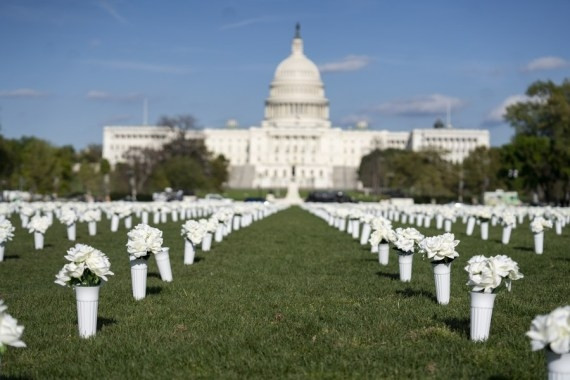 Washington, May 11 : The rate of gun homicide in the US increased sharply during the Covid-19 pandemic, according to a new research conducted by the Centers for Disease Control and Prevention (CDC).

Firearms were involved in 79 per cent of all homicides and 53 per cent of all suicides in 2020, Xinhua news agency quoted the CDC as saying in its "Vital Signs" analysis published on Tuesday.

"The tragic and historic increase in firearm homicide and the persistently high rates of firearm suicide underscore the urgent need for action to reduce firearm-related injuries and deaths," said CDC Director Rochelle Walensky in a statement.

America's gun death rate, which is 13 times higher than that of other high-income countries, has made it a global outlier, according to Everytown for Gun Safety, a US nonprofit organization that advocates for gun control and against gun violence.

Every year, more than 40,000 Americans are killed in acts of gun violence, and approximately 85,000 more are shot and wounded.

That is the equivalent of over 110 people shot and killed each day in the US, with more than 200 others shot and wounded.

Gun violence has led to more than 15,000 deaths in the US so far this year, according to nonprofit research group Gun Violence Archive's database.

The issue has also disproportionately impacted racial and ethnic minorities in the United States, researchers said.