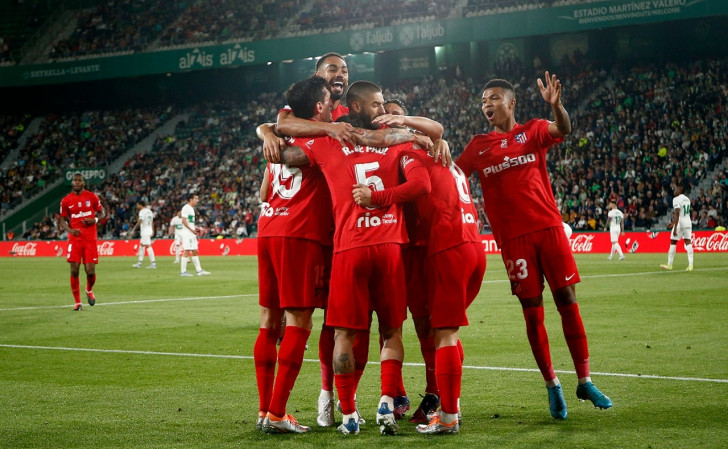 Madrid, May 12
Atletico Madrid moved into third place in La Liga, leapfrogging Sevilla, after a 2-0 win away to Elche on Wednesday.
The result, which came thanks to goals from Matheus Cunha's 28th-minute goal and a second-half effort from Rodrigo de Paul, assures Atletico's place in next season's Champions League.
Sevilla dropped to fourth after drawing 0-0 at home to Mallorca, with a result that leaves Sevilla (who visit Atletico on Sunday) with work to do to assure a top-four finish, while leaving Mallorca in the bottom three and still in deep relegation trouble.
Sevilla had most of the chances and were close to taking all three points in injury time when Mallorca keeper Manolo Reina produced a spectacular save to tip Youssef En-Nesyri's header over the bar.
Alaves climbed off the bottom of the table and kept their slim hopes of avoiding relegation alive until the weekend with a 2-1 win at home to Espanyol, reports Xinhua.
The team from Vitoria reacted well to their defeat in Vigo at the weekend and opened the scoring in the 7th minute thanks to Miguel de la Fuente.
Raul de Tomas leveled from the penalty spot soon afterwards, but Espanyol's options weren't helped by Yangel Herrera's red card at the start of the second half and Gonzalo Escalante sealed the win just before the hour.
Getafe edged another point closer to safety with a 1-1 draw away to Osasuna after a solid defensive display in the second half.
Oier Sanjurjo Mate, who announced his retirement earlier in the week, opened the scoring in an emotional moment in the 9th minute, but Lucas Torro's own goal in the 20th minute saw the points shared.