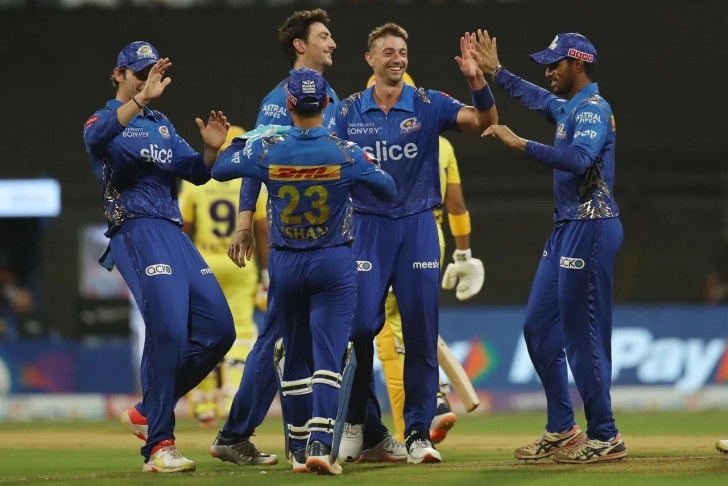 Mumbai, May 13 : Daniel Sams claimed 3/16 while Riley Meredith and Kumar Kartikeya scalped 2/27 and 2/22 respectively as Mumbai Indians bowled out Chennai Super Kings for 97 before surviving some anxious moments to rattle the runs and claim a five-wicket win in Match 59 of the IPL 2022 at the Wankhede Stadium here on Thursday.

Chasing 98 for victory, Mumbai Indians were in trouble at 33/4, losing their top batters Ishan Kishan (6) and skipper Rohit Sharma (18) cheaply.

Choosing to bowl first, the Mumbai Indians pacers bowled good lines and hard length and used the juice in the wicket well. The ball was swinging even in the 8th over but there were no demons in the pitch. CSK were hard-done on some occasions but their batters too did not show necessary application to counter the condition and good bowling.

In reply, Mumbai looked in trouble as they ended the powerplay at 36/4, only a slightly better position compared to CSK who were 32/5. Mukesh Choudhary bowled brilliantly, claiming 3/23 in four unchanged overs, troubling the Mumbai Indian batters with his superb line and length, using the juice in the pitch. But in the end, the score of 97 did not give CSK enough leeway.

Mukesh Choudhary raised Chennai Super Kings' hopes of an unlikely win as he claimed 3/23 in his four overs, bowled unchanged, as Dhoni went on the attack. Choudhary, the joint-most successful bowler for CSK with Dwayne Bravo at 16 wickets, made the most of the conditions and bowled a superb line and hard length to rattle the Mumbai Indians batting order.

He made the breakthrough for CSK in the first over itself, sending back Ishan Kishan (6) as the batter chased an outswinger bowled wide and edged behind to Dhoni. Mumbai skipper Rohit Sharma started with a four off Simarjeet Singh in the second over and then sent Choudhary to the fence twice in the third over, backing away to one pitched on the middle and hitting it flat over mid-off and punching a fullish but slightly wide delivery to the boundary. But he was out for 18 off 14 deliveries, nibbling at a wide one and offering an edge to Dhoni off Simarjeet Singh.

And when Daniel Sams and debutant Tristan Stubbs (0), in for Kieron Pollard, departed in quick succession, Mumbai were in trouble at 33/4.

However, Tilak Varma and Hrithik Shokeen put them on road to victory with a 48-run partnership for the fifth wicket. Both of them did not take any risks and batted sensibly, mostly dealing in singles and doubles but not hesitating to hit the occasional boundaries as they took Mumbai to 81 before Shokeen fell, succumbing to an unnecessary rush of blood as he jumped out of the crease to a fine delivery by Moeen Ali that turned big, avoided the bat and rattled the stumps.

But with just 17 runs needed to win the match, Tim David hammered Moeen Ali for two sixes in the 15th over to seal a five-wicket win for Mumbai Indians with 31 balls to spare.

This was Mumbai's third win in 12 matches and took them to six points while CSK slumped to their eighth defeat and remained on eight points from 12 games, thus ending their slim hopes of making it to the last four.

Earlier, Chennai Super Kings got off to a horrible start as they ended the powerplay at 32/5.

Devon Conway was the first to go, given out lbw off Daniel Sams to the second delivery of the first over that looked going down the leg-side to the naked eye. With DRS unavailable due to "technical reasons", Conway had to trudge back to the stadium without reviewing the decision. Two deliveries later, Moeen Ali (0) joined him in the dugout. Caught in double mind, he top-edged a short one by Sams and Hrithik Shokeen pouched a well-judged catch. CSK were 2/2 in the first over.

Robin Uthappa (1) did not last long, trying to flick across the line to a length ball by Jasprit Bumrah and rapped on the front pad while Ruturaj Gaikwad (7), who had watched the carnage from the other end, edged one down the leg-side and was caught by the keeper.

Ambati Rayudu (10) stayed for 14 deliveries, struck two fours -- one off Bumrah, gliding a length ball pitched on off-stump past the short third-man, and the second off Riley Meredith with a superb backfoot square drive, before getting out to a fine delivery, edging back to an inswinger. CSK were reeling at 29/5 in the sixth over.

Shivam Dube, who has rescued CSK with some good batting down the order in a couple of matches, struck Meredith for a four with a fine pull shot but the bowler had the last laugh as Dube edged the next ball, a short one on the middle stump to Ishan Kishan and the keeper took a superb catch, CSK slump to 39/6 and staring down the barrel.

Skipper MS Dhoni and Dwayne Bravo added 39 runs for the seventh wicket partnership but could not pull CSK out of trouble. Bravo fell to a well-planned strategy by Mumbai Indians. Tilak Varma, stationed at short cover, plucked a brilliant one-handed catch as Bravo drove a low full toss by Kumar Kartikeya Singh. It was a lucky break for Mumbai Indians as such catches just stick to raised hands but Varma was quite brave to put his hand out to a ball that was flying like a bullet.

Dhoni waged a lone battle as he remained not out with 36 runs, hitting four boundaries and two sixes. He struck Kumar Kartikeya to the boundary off successive deliveries and lifted Shokeen to a big six in the 10th over. He also struck Meredith to a four and a six in the 16th over before he tried to retain the strike but they failed as Choudhary was caught short and run out.