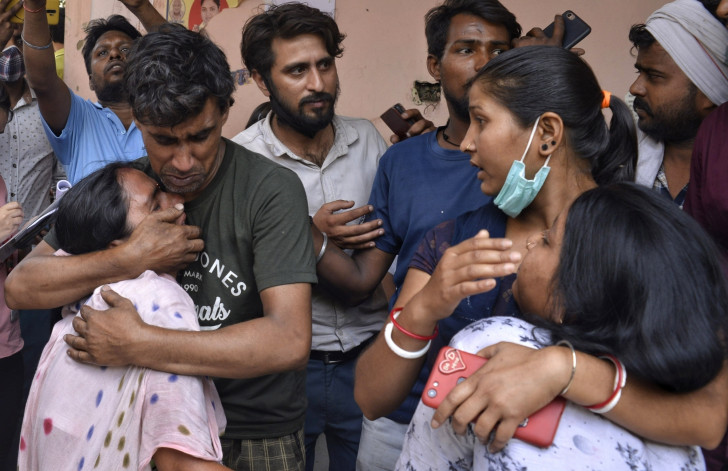 New Delhi, May 14 : While at least 27 people died in the massive fire that broke out in the four-storey building in Delhi's Mundka, over two dozen people are missing and their relatives are enveloped in despair and uncertainty.


An atmosphere of grief pervaded the Sanjay Gandhi Memorial Hospital where the injured, as well as the dead bodies, were taken after the incident on Friday evening.

The charred remains also made identification difficult. Meanwhile, the administration is also clueless about the whereabouts of those missing since the tragedy.

Talking to IANS, Sameer Sharma, DCP Outer said: "We rescued around 50 people yesterday. The identification process of the victims has started. So far, only five bodies have been identified."

He also added that 12 injured persons have been discharged.

"We will initiate the DNA process for those dead bodies which cannot be presently identified. For this, an FSL team will try to complete the identification process within a short span of time," DCP Sharma added.

While an injured witness told IANS that a meeting was going on with the factory owner when the fire broke out.

She said that since everyone was inside the meeting room, they came to know about the blaze only later.

Meanwhile, BJP MP Hans Raj Hans also visited the hospital on Saturday and said that "we should learn from this tragedy to avoid future incidents".

He also slammed the authorities for not properly checking the fire licenses.

Meanwhile, Delhi Chief Minister Arvind Kejriwal, who also visited the site, said that the "guilty won't be spared" and has ordered a magisterial enquiry into the incident.

He said that the kin of the deceased will be provided an ex-gratia relief of Rs 10 lakh each, while the injured will be given Rs 50,000 per person by the Delhi government.