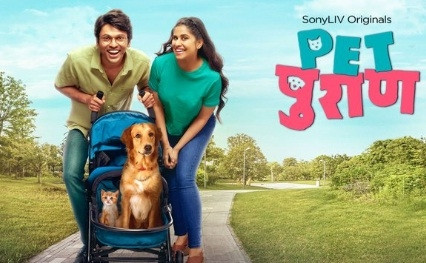 Mumbai, May 14
Actress Saie Tamhankar who played the female protagonist in the latest released Marathi language web series 'Pet Purran' says the whole concept of pet parenting is quite an urban affair, especially for young couples whereas previous generations do not understand the decision of choosing a pet over a child for parenting.
In conversation with media, Saie said, "I think it is actually quite an urban affair where our generation, young couples are more fond of pet parenting; having a dog as companion or showering the unconditional love and cuddle them. For our parents, it is not parenting and the story of our show is also revolving around that."
"But I strongly believe that even when we are children, if we live with pets in the household, it adds an extra layer of compassion and sense of co-existence in our mind. When we grow up, our ego and superiority complex also increases. Living with a pet changes that, the ability of silent communication increases and that is therapeutic for our emotional health," shared the actress.
The story of 'Pet Puraan' is based on the journey of a young couple who after their marriage decided not to have children but their parents started questioning their decision. As they realised that unless they become parents the elders won't stop commenting on their marriage life, they decided to adopt a cat and a dog. How these two very opposite-natured pets made them go crazy in their daily lives - unfolds in the show.
Directed by Dnyanesh Zoting, and produced by Ranjit Gugle, 'Pet Puraan' also featuring Lalit Prabhakar and it streams on SonyLIV.