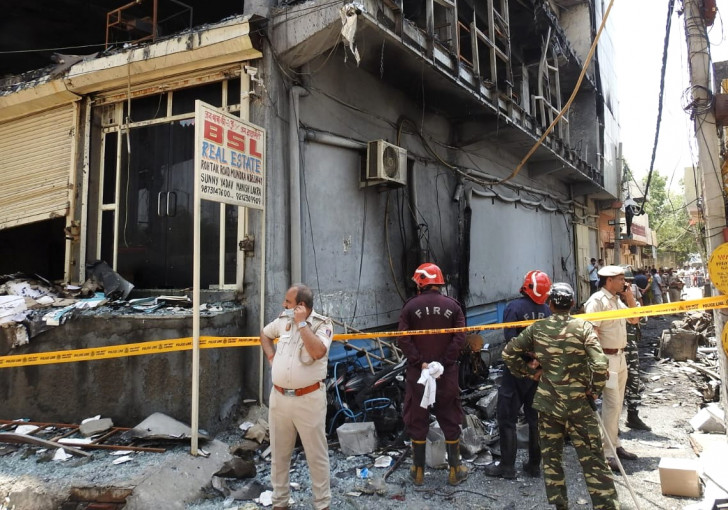 New Delhi, May 14
The police have been able to identify seven among the 27 bodies recovered from the building that was gutted in Friday's massive fire, an official said on Saturday.
Bodies of Tania Bhushan, Mohini Pal, Yashoda Devi, Ranju Devi, Vishal, Drishti and Kailash Jyani have been identified till now.
The remaining 20 are yet to be identified.
Meanwhile, the relatives of the people, who were inside the building at the time of the fire incident, are still clueless and unable to find their loved ones, 15 hours after the inferno claimed 27 lives.
Most of the bodies were burnt beyond recognition making it difficult to even identify the gender. Pertinently, 24 women and five men are still reportedly missing since the incident. Manoj Thakur, from Saharsa in Bihar, told IANS that he is trying to locate his wife Soni who was at the building when the incident occurred. He said Soni had called him to inform about the fire, but her phone was switched off after that. "We are moving from pillar to post to locate her," the worried husband said.
Chaos prevailed the whole night at the Sanjay Gandhi hospital where the bodies from the incident were shifted with people pouring in to locate their loved ones.
"I have been sitting here for the past 12 hours and have no clue where my wife is. We are getting no response from the officials," said another man at the Hospital whose wife used to work in the same building.
Kin of another missing man said that they got to know about the incident while watching the news and since then have been running helter-skelter in search of their relative.
A help desk has been set up at the hospital to assist the people locate their missing relatives.