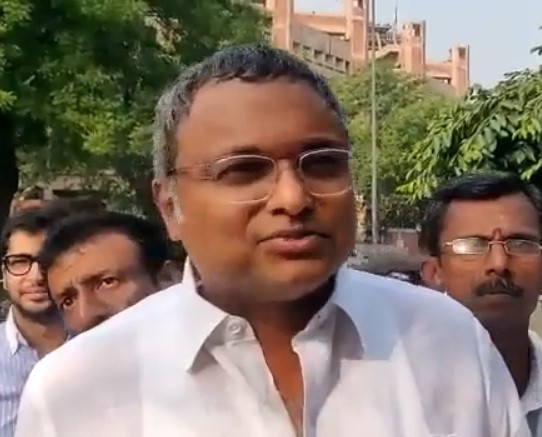 New Delhi, May 26 : Congress MP Karti Chidambaram, who is an accused in the Chinese visa scam, on Thursday alleged that the Centre was "misusing" its agencies to frame him and his father and former Union Minister P. Chidambaram.

While interacting with the media after recording his statement before the investigating agency, he said that the case was nothing but a "tactic" to harass him.

Karti Chidambaram said his father was being targetted through him.

"The central government is once again using its agencies to accuse me of a malicious and completely fabricated charge. Previously, the agencies have gone after me based on the statement of an undertrial murder suspect. Now, they are basing their bogus charges on the alleged actions of a deceased person, whom I have never met," he said.

In a statement to the CBI, he dismissed all charges levelled against him saying: "I have no relationship whatsoever with any of the corporate entities mentioned in the FIR. I have never facilitated even a single Chinese national in their visa process, let alone 250. I don't know about Visa formalities and who is the authority."

"I have also never known the person (now deceased) whose alleged action triggers this charge," he added.

S.Bhaskararaman, his Charted Accountant was recently held in the case. CBI wanted to confront him with Karti.

Bhaskararaman is in custodial remand of the CBI.

A sales deed which recovered by the CBI during the raids was very important. The sales deed is of a property bought in Jor Bagh and the power of attorney is in the name of Bhaskararaman whereas the property was bought by Karti and his mother.

Karti Chidambaram was questioned in this connection.

As per an FIR filed recently, a Mansa (Punjab)-based private firm, Talwandi Sabo Power Limited, took the help of a middleman and allegedly paid Rs 50 lakh to get the visa issued for Chinese nationals to complete a project before the deadline.

According to CBI, "A bribe of Rs 50 lakh was allegedly demanded by the private person based at Chennai through his close associate which was paid by the Mansa-based private company.

"The payment of said bribe was routed from the Mansa-based private company to said private person of Chennai and his close associate through a Mumbai-based company as payment of false invoice raised for Consultancy and out of pocket expenses for Chinese visas related works, whereas the private company based at Mumbai was never in any kind of work relating to visas rather it was in an entirely different business of industrial knives."