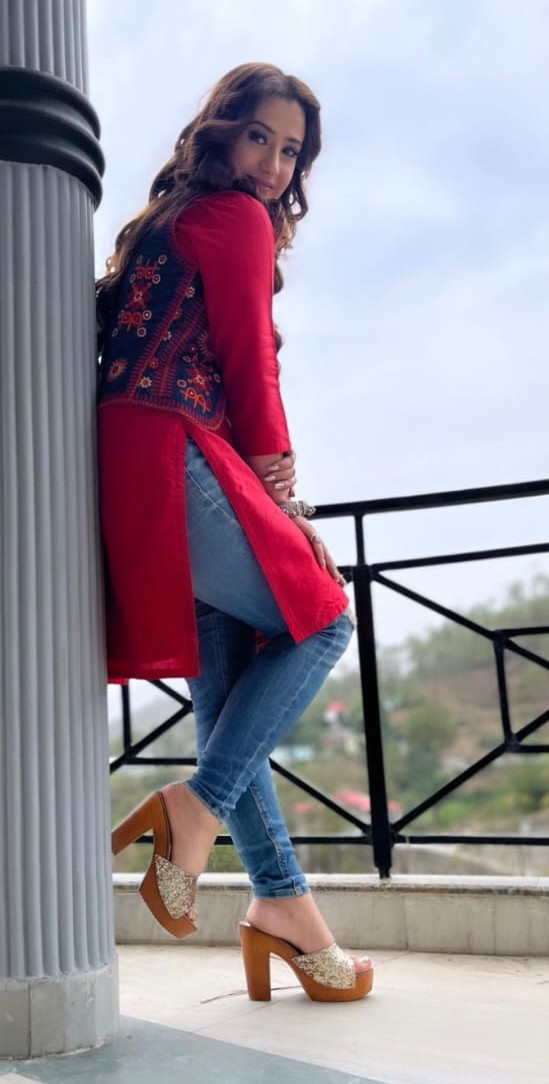 Mumbai, May 26
Actress Aalisha Panwar is currently shooting for a short film titled 'Blind Love 3' in Himachal Pradesh. This is the third season in the making.
Speaking about it Aalisha says: "The journey of 'Blind Love' has been a memorable ride. When I started with the first season I never thought that we would be shooting for the third season; in fact no one thought of it. But from the very beginning what I loved about this short film was its story. For the first time in my career I have played the character of a blind girl - Naina. I could showcase my versatility through Naina."
The first season got more than 16 million views and the second more than 10 million.
She further adds: "The third season is the continuation of the earlier seasons. In this season we will see what happens to Naina as she leaves Rohit for Rohan. There have been many comments from fans on how they felt about Rohit. So people will come to know the conclusion now."
Aalisha also has an additional perk for this short film - the last three seasons have been shot in Himachal Pradesh which happens to be Aalisha's hometown.
She adds" "It is a fulfilling experience shooting in Himachal Pradesh. In the first season we shot in Shimla and then in the second season we were in Salong and now for the third season we are in Chail. Even our film has all the extras from the locals only."
"Surrounded by your own set of people is a special feeling and then my tastebuds are so happy to get all the local food. Also shooting in Himachal in May is such a blessing because the weather here is very pleasant. We could avoid the scorching heat of Mumbai and enjoyed our time."
"On the second day of our shoot there was a tremendous thunder storm. Where we were shooting in Chail, just behind our cottage there was a forest, and literally in front of us the jungle caught fire. We were quite surprised with the entire incident and then in sometime the rains stopped the fire."
Aalisha also feels 'Blind Love' has been a trendsetter. When she started with season one, popular leads were not much into short films.
"When I started with the first season of 'Blind Love' I was a bit reluctant as in my knowledge there are not many leading faces doing short films.But I took the plunge and after people started watching the film I have been getting a lot of positive feedback from industry, my actor friends, producers."
"They used to call me, message me and share their point of view. So in a way this is reassuring for all of us that popular leading faces can venture into the short film genre. I have also noticed Blind Love has been translated into a few foreign languages and that's an add on feather for all of us."
Directed by Pradip Khairwar, 'Blind Love 3' also stars Shagun Pandey.