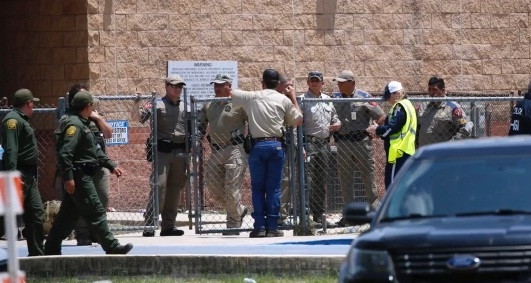 Houston, June 23
A police chief accused of mismanaging the response to the May 24 school shooting in Uvalde, Texas, that claimed the lives of 19 children and two teachers, has been put on leave, according to the media.
In a statement on Wednesday, School district superintendent Hal Harrell said he had placed Pedro Arredondo, head of the school district police force, on administrative leave effective immediately, citing "the lack of clarity that remains and the unknown timing of when I will receive the results of the investigations", the BBC reported.
He said he had originally planned to "wait until the investigation was complete before making personnel decisions", but was "still without details" of what the inquiry has found.
Arredondo, head of the school district police force, has been blamed for law enforcement delays in confronting the 18-year-old gunman Salvador Ramos.
Just days after the shooting at the Robb Elementary School, Texas Department of Public Safety Director Steven McCraw had claimed that local police made the "wrong decision" by waiting nearly an hour to breach the school classroom where Ramos shot at children and teachers before he was neutralised by law enforcement.
Nearly 20 officers stood outside the classroom during the attack and the on-scene commander believed at the time that the shooter had barricaded himself and that the children were no longer at risk, according to McCraw.
At a state Senate hearing on Tuesday, McCraw said that Arredondo had "decided to place the lives of officers before the lives of children" and labelled the response an "abject failure".
This was the third-deadliest school shooting in the US, after the Virginia Tech shooting in 2007 and the Sandy Hook Elementary School shooting in 2012, and the deadliest in Texas.
According to the latest data from Gun Violence Archive, the US has witnessed 267 mass shootings since the start of the year, with more than 20,000 lives lost to gun violence.