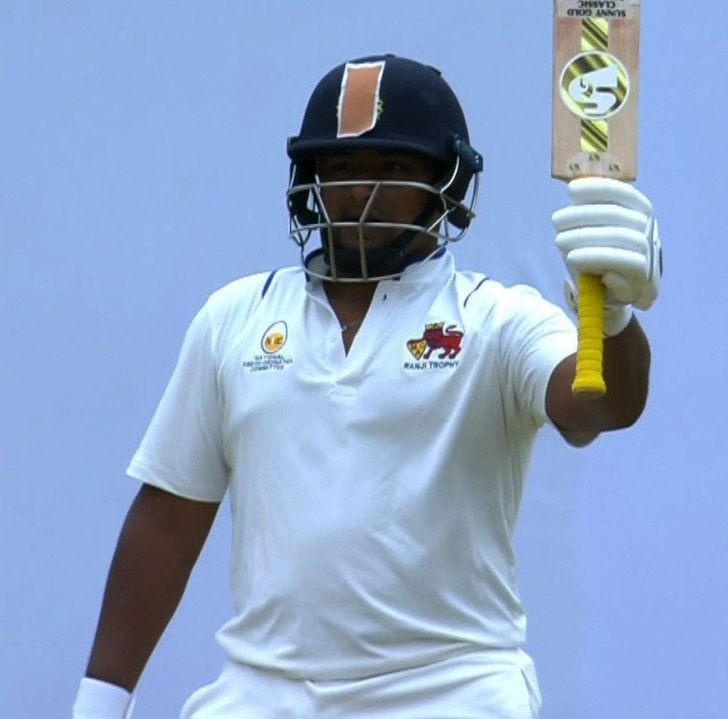 Bengaluru, June 23 : Sarfaraz Khan's run-making juggernaut continued with his fourth century of the ongoing Ranji Trophy season, taking Mumbai to 351/8 in 122 overs at lunch on day two of the final against Madhya Pradesh at the M. Chinnaswamy Stadium on Thursday.

After being watchful on day one, Sarfaraz stood firm on day two and was rewarded for his perseverance with an unbeaten 119, which also marked the second time he crossed the 900+ runs mark in a Ranji Trophy season after amassing 928 runs in 2019/20 season, becoming just the third batter after Ajay Sharma and Wasim Jaffer to do so.

Resuming from 248/5 on day one, Mumbai lost Shams Mulani on just the second ball of the day when pacer Gaurav Yadav got one to jag back in and trap him plumb lbw. Sarfaraz first showed signs of shedding his cautious self when he sliced Gaurav over a backward point for a boundary.

With Gaurav and Anubhav Agarwal keeping things tight, Sarfaraz was unable to get his shots and was stuck on 45 for long. As soon as left-arm spinner Kumar Kartikeya Singh got into the attack, Sarfaraz opened up by nailing a sweep over mid-wicket and reached his fifty with a single through the same region.

Sarfaraz continued to nail his sweep against Kartikeya while timing his straight-down-the-ground drives. Though Gaurav took out Tanush Kotian's off-stump with a peach of a delivery and Dhawal Kulkarni nicked to the keeper off Anubhav Agarwal, Sarfaraz continued to march forward despite having a nasty collision with Gaurav. He even brought out the ramp shot against Anubhav, with the ball going over the keeper and slips for a cheeky boundary.

Sarfaraz then reached his century in 190 balls by driving Kartikeya down the ground to complete a superb knock under pressure. His celebrations on reaching the three-figure mark ranged from being teary-eyed and punching the air in delight to bringing out the kabaddi thigh-five, met with thunderous cheers from the Mumbai camp and a limited number of spectators in the stadium.

After reaching the century, Sarfaraz continued to attack Kartikeya, slog-sweeping him for a six-over deep mid-wicket and was followed by Tushar Deshpande slamming a boundary down the ground as Mumbai fetched 103 runs in the session.