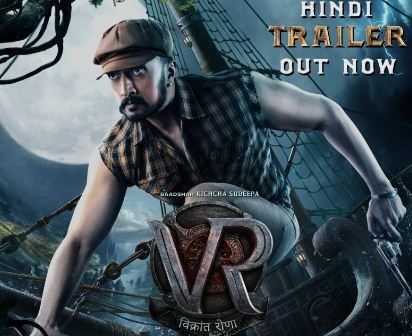 The trailer of the pan-India 3D mystery thriller drips grandeur beginning with Kichcha Sudeep's entry to the innovative visual effects.

With an interesting concept and mesmerising 3D visuals, the trailer captured glimpses of a village scene in a majestic way. Kichcha Sudeep's entry on the ship is mesmerising while glamorous Jacqueline Fernandez steals the show with her hot avatar.

The trailer launched in Mumbai, where the media got to see the 'Ra Ra Rakkamma' song exclusively. The trailer has come as a perfect treat to the audience.

Big names from different film industries have come together to launch the trailer in different languages. Where Salman Khan launched it in Hindi, Dhanush did it in Tamil, Dulquar Salmaan in Malayalam, Ram Charan in Telugu, and Kichcha Sudeep in Kannada.

It is presented by Salman Khan Films, Zee Studios and Kichcha Creatiions in north India. 'Vikram Rona' is produced by Jack Manjunath under his production Shalini Artss, and co-produced by Alankar Pandian of Invenio Origins the film.

The film will be distributed in north India by PVR Pictures.