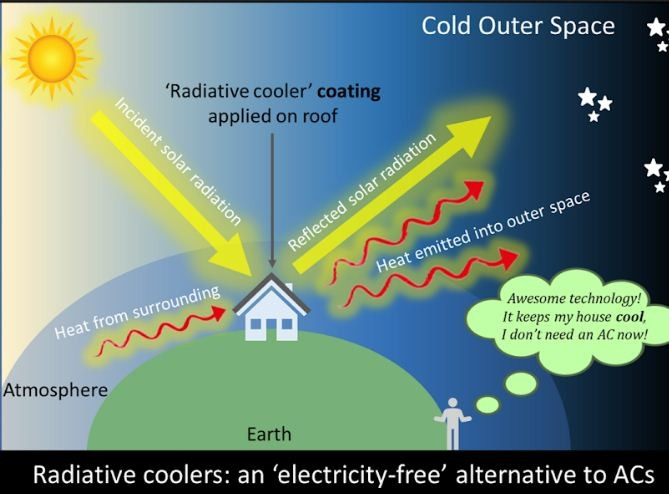 Guwahati, July 4 : Researchers at the Indian Institute of Technology (IIT) Guwahati have designed an affordable and efficient 'passive' radiative cooling system that does not require electricity to operate and can provide an alternative to the conventional air-conditioners, the institute said on Monday.

This 'Radiative Cooler' coating material is an electricity-free cooling system as it can be applied on rooftops and functions both during day and night.

Passive radiative cooling systems operate by emitting the heat absorbed from the surrounding in the form of infrared radiations that can pass through the atmosphere before getting dumped into the cold outer space.

"These radiative coolers requiring no external energy sources for their operation could be one of the best alternatives to replace the conventional air conditioning systems used to cool buildings and automobiles in countries experiencing hot weather, such as India," said Prof. Debabrata Sikdar, Assistant Professor at Department of Electronics and Electrical Engineering, IIT Guwahati, in a statement.

"Unlike traditional cooling technologies that dump the waste heat into the surroundings, radiative cooling is a unique process that cools an object on the earth by sending excessive heat directly into the extremely cold universe," he added.

However, most passive radiative coolers operate only at night. For daytime operation, these coolers need to reflect entire solar radiation as well. Till now, these cooling systems are not able to provide sufficient cooling at daytime.

"For a radiative cooler to work during daytime, the material should reflect the solar and atmospheric radiations falling on it. Since the materials used in conventional coolers absorb more solar radiations and emit less during the day, those do not work during daytime. While daytime cooling can be achieved using polymer-based passive radiative coolers, oxidation degrades the polymers resulting in a limited lifespan," explained Ashish Kumar Chowdhary, a research scholar at IIT Guwahati.

To address this, the team considered using thin films of silicon dioxide and aluminium nitride. These materials have low optical density corresponding to the wavelength range of solar and atmospheric radiations.

But at atmospheric transmittance wavelengths, they have high optical density. When optical density is high, radiations travel slower through a medium and get absorbed more. To remain at thermal equilibrium, the material emits all the absorbed radiation like a black body.

Instead of a single layer, the team cascaded silicon dioxide and aluminium nitride thin film layers on a silver layer, used as a ground metal, placed over a silicon substrate.

The cooler they designed achieved about 97 per cent reflectance for solar and atmospheric radiations and 80 per cent emissivity for radiations in atmospheric transmittance wavelengths.

The net cooling power is estimated to be 115 watt per square metre which could reduce ambient temperature up to 15 degrees below the outside temperature.

Their innovation has been recently covered in the Current Science Report, which was initially published in Journal of Physics D: Applied Physics.

Compared to a recent cooler design achieving a comparable reduction in ambient temperature, this cooler is found to provide around 1.6 times more cooling power, the team said, adding this will reach the market once the large-scale prototypes are developed and tested for operational stability and durability under different climatic conditions.