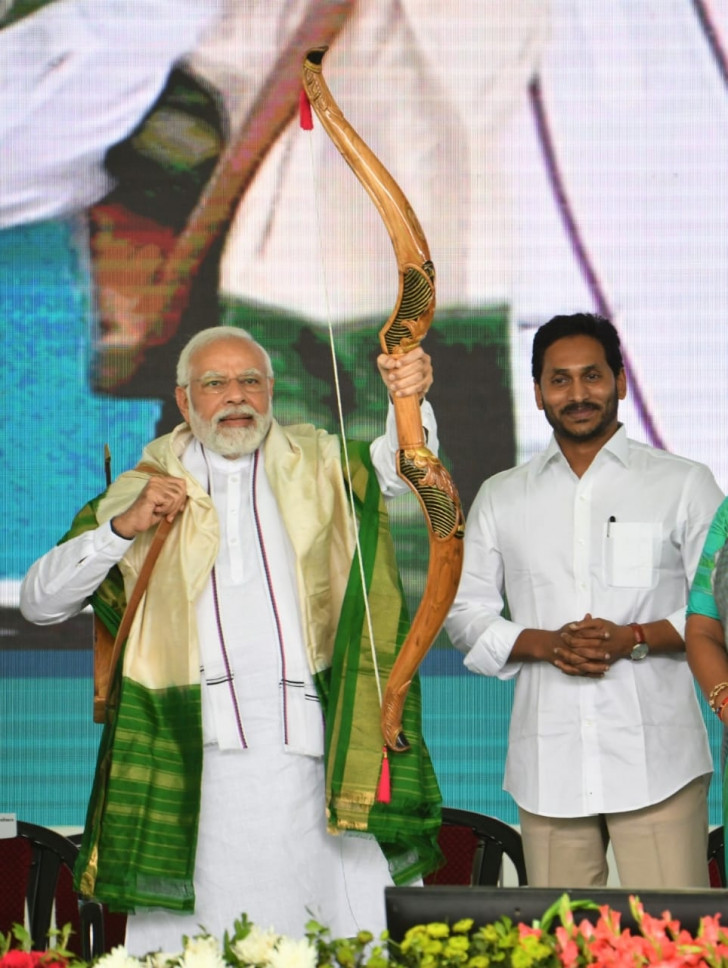 Taking every one by surprise, the chief minister presented a bow and a quiver to Modi.

Bow and quiver of arrows is a symbolic representation of 'Manyam Veerudu' or forest hero as Alluri Seetarama Raju was popularly known. The tribal warrior took on the might of British with bow and arrows and led a rebellion with an army of tribals with their traditional weapons and astounding warfare.

While felicitating relatives of Sitarama Raju and tribal chieftain Mallu Dora, the Prime Minister bowed to them.

Modi began his speech with few words in Telugu, evoking applause from the people.

He unveiled a 30-feet bronze statue of Sitarama Raju to launch year-long celebrations.

The chief minister, in his speech, said that freedom fighters aspired to build a society where there is no exploitation from one person to another, one country on another one. He stated that lakhs of fighters have laid their lives for the freedom of the country.

Jagan Mohan Reddy said that Alluri Sitarama Raju is one among such fighters, who was born in Andhra Pradesh and fought against foreign rule.

He pointed out that a district in Andhra Pradesh was named after Alluri Sitarama Raju during the recent reorganisation, and stated that a bronze statue is being unveiled in that district too marking his 125th birth anniversary.

He said that the nation will never forget a great man like him, who sacrificed his life at a young age, and stated that future generations shall cherish his fighting spirit.