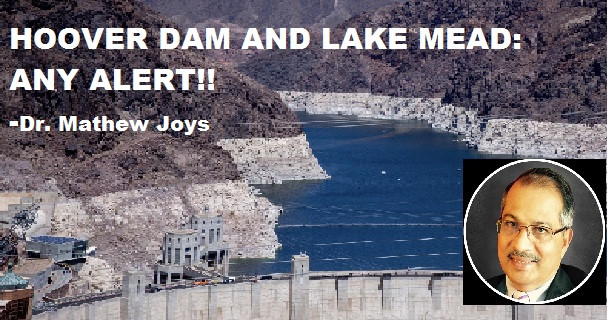 Hoover Dam near Las Vegas, is known globally for its cute architecture. The reservoir created by the damming of the Colorado River became Lake Mead, drew thousands of visitors to this wondrous contrast of desert and water. Lake Mead gets water from Lake Powell, the second-largest reservoir in the country. Its water supply is around a fourth of what it used to be.
Now the Lake Mead is at an elevation of 1,046.3 feet. That's more than 40 feet lower than the 1,087.1 feet elevation two years ago in June 2020. The latest two-year projection from the federal agency shows that the lake could drop as low as 1,020 feet within the next two years.
From 1983, fast-forward nearly four decades, Lake Mead is now 178 feet lower and continuing to shrink, may find alarming!
The megadrought currently choking the western United States is the worst drought in the region in more than 1,000 years. It's having an enormous impact across many states and on several major reservoirs, including Lake Mead, a water source for millions of people in the West.
Last week measured at 1,044.03 feet, its lowest elevation since the lake was filled in the 1930s. If the reservoir dips below 895 feet — a possibility still years away — Lake Mead would reach dead pool, carrying enormous consequences for millions of people across Arizona, California, Nevada and parts of Mexico. A dead pool would not mean no water was left in the reservoir, but even before Lake Mead was hit, there were concerns that water levels could fall so low that hydroelectric power production would be hindered.
A clear high-water mark known as a "bathtub ring" is seen on the shores of Lake Mead at the Hoover Dam near Las Vegas, Nevada, on June 10, comparing the reservoir when filled in the 1930s. (Photo by Bridget BENNETT).
Astounding to hear the latest news of a body in a barrel, human skeletons along the shorelines, ghost towns, a crashed B-29 Superfortress that used to track cosmic rays, Prehistoric salt mines etc., are revealed when the water level dropped. What all will the receding waters of Lake Mead show in the days ahead?
.
The Colorado River Basin, a lifeline of the American Southwest, is shrinking. And, with it, the country's two largest reservoirs are going dry. Just 30 miles east of Las Vegas sits Lake Mead on the border of Arizona and Nevada. It's the largest artificial reservoir in North America.
Lake Mead pumps water from the Colorado River to nearly 25 million people. It's a significant water source for residents and tribes in Arizona, Nevada, California, parts of Mexico and some of the country's most productive agricultural sites. About 75 percent of the water goes to irrigation for agriculture. That supplies about 60 percent of the food for the nation that's grown in the United States.
But the lake has been declining for decades due to rising temperatures and climate change, cracked earth and mud where water used to be. Now it's only 30 percent full, an historic low. Over the years, rusted debris and sunken boats have emerged, more recently, some darker discoveries, human remains lost for decades.
Below Lake Mead, the Hoover Dam provides hydroelectric power to 1.3 million people across three states. But the dam is operating at 67 percent of its capacity. If the reservoir's elevation falls below 950 feet, the dam's turbines will stop spinning.
States in the Southwest have started limiting some of their use of the Colorado River Basin. And last month, federal officials took unprecedented action to temporarily keep enough water in Lake Powell, one of the country's largest reservoirs, to continue generating hydropower for a million homes.
Southern California already started restricting water use, including watering of lawns to once or twice a week, for about six million residents. It's also having a significant impact on Lake Mead, a primary water source for agriculture and millions of people in the American West.
In Nevada there have been measures to remove grassy lawns and save irrigation water that they can put back into the system. So there is a spirit of ensuring that people can protect water for the folks in their jurisdictions.
Now as a creative solution, the following report is highly impressive. Regarding the Mississippi Water Letters of June 26, citizens of Louisiana and Mississippi south of the Old River Control Structure don’t need all that water. All it does is cause flooding and massive tax expenditures to repair and strengthen embankments.
The best solution would be for the U.S. Army Corps of Engineers to build an aqueduct from the Old River Control Structure on the Mississippi to Lake Powell, fill it, and then send more water from there down the Colorado to fill lake Mead. About 4.5 million/gals a second flow past that structure on the Mississippi. As mentioned, New Orleans has a problem with that much water anyway, so let’s divert 250,000 gallons/sec to Lake Powell, which currently has a shortage of 5.5 trillion gallons.
Lake Mead has a somewhat larger shortage, about 8 trillion gallons, but it could be filled in about 370 days at 250,000 gallons/sec.Hence, this megadraught is not the catastrophic end of everything, alternative solutions will pave way for better days ahead.