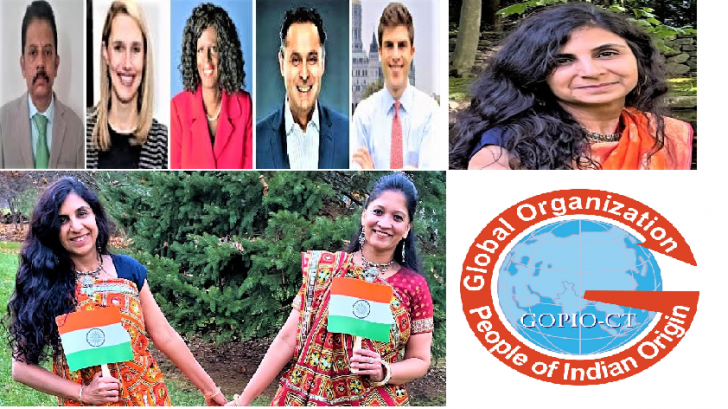 India got its independence from the British in 1947. To mark the 75th Anniversary of India’s independence, the Connecticut chapter of the Global Organization of People of Indian Origin (GOPIO-CT) has joined hands with Stamford City and Mill River Collaborative to host India Festival in Stamford to commemorate Indian Independence, when the then Prime Minister Pandit Jawaharlal Nehru raised the Indian flag at the Red Fort in New Delhi on August 15, 1947.
The Indian Diaspora in Connecticut is a growing community consisting generally IT and management professionals. healthcare workers and a large number of entrepreneurs in hospitality and small businesses. They will join for a celebration organized by the GOPIO-CT by hoisting American, Indian and Connecticut flags at the Government Center in Stamford on Sunday, August 7th at 11.30 a.m.
Following the flag hoisting, at 12.00 Noon, there is an official ceremony to celebrate Indian Independence Day at the adjacent Mill River Park (corner Broad St. and Mill River St., Stamford). Honored guests are Indian Consul A.K. Vijayakrishnan, Stamford Mayor Caroline Simmons, CT State Senator Patricia Billie Miller and CT State Representatives Harry Arora representing CT 151st district and Matt Blumenthal representing 147th district.
After the ceremony, the Mill River will witness Kite flying and an India Festival with colorful Folk and Classical Dances of India, Music, Magic Show and Bollywood Dances. There will be vendors for Indian food, Indian arts and crafts, Indian clothing and other items. Admission is FREE for both events. Free limited Carousel rides will be provided for small children.
Norwalk resident Mrs. Yashasvi Mahesh Jhangiani will be bestowed with Indian Independence Liberty Award for service to GOPIO-CT and for community service. Yashasvi has been familiar face in the community in Connecticut for 20 plus years volunteering her time wherever there is a need. A Homeopath by profession, she is also a volunteer EMT with Westport EMS since 2003, on faculty for their American heart association CPR AED-First aid program and a member of the Norwalk Emergency response team. Besides helping at GOPIO, she gives her time and actively raises funds for several other community-based service organizations. Yashasvi can be the driving force and energy behind any event that has a good cause as a motive and she loves to spread joy through dance!
The celebration is hosted by Mill River Park Collaborative and the sponsors are investment firm 3Lines and the community organization IM of the Saree.
Over the last 16 years, GOPIO-CT, a chapter of GOPIO International has become an active and dynamic organization hosting interactive sessions with policy makers and academicians, community events, youth mentoring and networking workshops, and working with other area organizations to help create a better future. GOPIO-CT – Global Organization of People of Indian Origin – serves as a non-partisan, secular, civic and community service organization – promoting awareness of Indian culture, customs and contributions of people of Indian origin through community programs, forums, events and youth activities. It seeks to strengthen partnerships and create an ongoing dialogue with local communities.
Honored guests and elected officials at the celebration - Indian Consul A.K. Vijayakrishnan, Stamford Caroline Simmons representing, CT State Senator Patricia Billie Miller representing Senate District 27, CT Rep. Harry Arora representing 151st District and Matt Blumenthal representing 147th District
Dancers who would perform at the India Festival
Yashasvi Jhangiani, Recipient of GOPIO-CT’s Liberty Award 2022