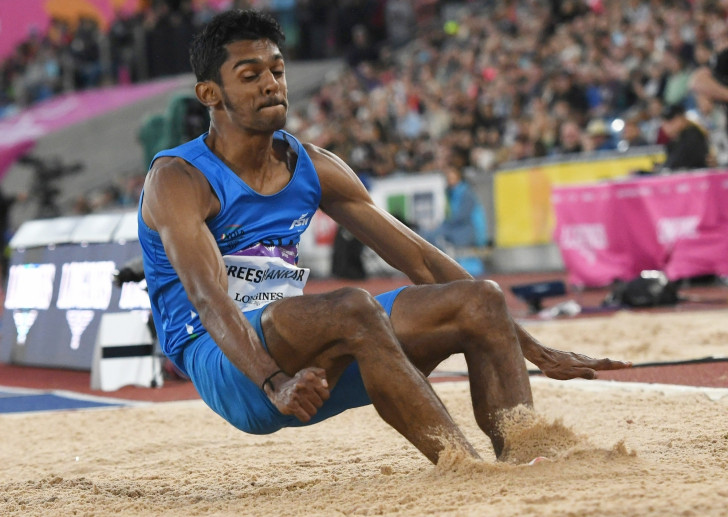 Birmingham, Aug 5 : On so many occasions has long jumper Murali Sreeshankar finished between fifth and seventh position in his nascent international career from junior to the senior level that the Indian national champion did not get fazed by finding himself at the now familiar seventh spot in the 2022 Commonwealth Games here.


The 23-year-old from Palakkad in Kerala had recently finished seventh in the 2022 World Athletics Championships. He had done the same in the World Indoor Athletics, was placed fifth in the World Junior Athletics and several national and international events and, therefore, Sreeshankar was not worried about finding himself in the same position on Thursday.

The long jumper went on to win a historic maiden silver in slightly chilly and windy conditions, bettering the bronze that Suresh Babu had bagged in 1978 Edmonton, Canada. It was also the biggest medal of Sreeshankar's career that redeemed him and made for all the setbacks he has suffered in recent times, like missing the 2018 Commonwealth Games because of surgery and failure to qualify for the final in the Tokyo Olympics.

Sreeshankar has endured so much in the last few years that now he does not get flustered by finding himself staring at another disappointment. Sreeshankar had qualified for the Tokyo Olympics with a superb jump of 8.26m but fared miserably in the Japanese capital, failing to qualify for the final with a below-par effort of 7.69 after going into the event a few weeks after suffering health issues that impacted his fitness.

"I have got a lot of experience of being in that position. I have learned a lot from those experiences, so I was not worried. I know that I am a one-jump person -- that I will produce one big jump that will settle things," said Sreeshankar on Thursday.

One of India's biggest hopes in international track and field, along with high jumper Tejaswin Shankar, after Tokyo Olympic javelin throws gold medallist Neeraj Chopra, Sreeshankar had a few months back produced a big leap during the Federation Cup to jump from seventh to the top and win the title.

On Thursday at the Alexander Stadium here, Sreesankar made a brilliant leap of faith on his fifth turn, clearing 8.08 metres to move from seventh to joint first along with Laquan Nairn of the Bahamas, who had a better second jump of 7.94 as compared to 7.84 of the Indian.

On his sixth and last attempt in the men's long jump final on Thursday evening, Murali Sreeshankar came up with a gigantic leap but that was declared a foul by a narrow margin and he had to settle for a silver medal.

It was a tough contest as four jumpers were separated by just three centimetres -- Nairn of Bahamas and Sreeshankar were at 8.08, South Africa's Jovan van Vuuren was placed third with 8.06 while Jamaica's Shawn-D Thompson was at 8.05m -- going into the final two jumps.

But the position remained the same at the end as none of the four could improve their position in their fifth and sixth jumps.

Sreeshankar, however, had already produced his big leap of faith in his fifth jump that propelled him from 7.84 metres to 8.08 metres and put him in medal contention from nowhere.

He had started with a warm-up effort of 7.60 metres and improved it to 7.84 in his second and repeated the same in his third effort. In contrast, Nairn started with 7.94 and produced his best jump of the day,8.08, on his second attempt and had already taken the top spot. The South African jumper van Vuuren had also taken the second spot with an effort of 8.06m while Jamaica's Thompson cleared 8.05m in his third jump.

Sreeshankar had to act now and come up with a big leap to get into the medals bracket. He did just that -- produced what looked like a jump in 8.30s. But that was declared a foul -- Sreeshankar pulled up for crossing the take-off line on board by less than a centimetre.

"That was the narrowest margin I have ever been fouled. I was surprised to see that," said Sreeshankar. It was too close a call but possible because of a new laser-guided system that World Athletics uses.

Sreeshankar still did not lose heart even at that juncture.

"As I said I have learnt so much from the past experiences when I finished in 5th-7th positions that I was not worried. I knew that I can produce one big jump and that will settle things up," said Sreeshankar after the competition.

At this juncture, he was reminded by his father and coach S Murali that he had produced a big one at the Federation Cup from the same position while chief national athletics coach Radhakrishnan Nair whispered into his ears to control his breathing and lower his excitement.

Sreeshankar produced his best effort of 8.08 on his fifth jump and the rest as they say is history.

"It is not my best effort, well below my personal best (8.36), but I will take it any day. I am happy with my performance because of the medal. This is the biggest medal I have won in a global meet and I thank my father, my family, the federation, the Sports Authority of India, my sponsors JSW and the sports ministry for showing faith in me and helping me achieve this," said Sreeshankar.