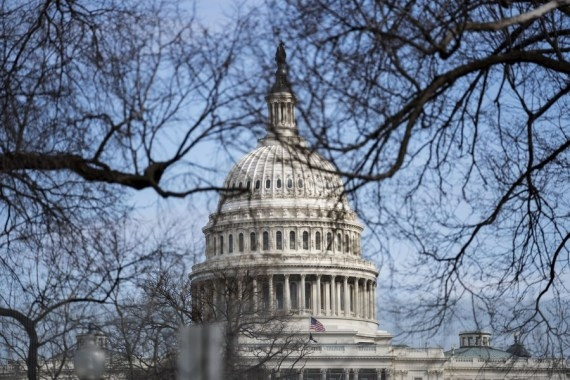 Washington, Aug 6
US Democratic Senators were putting the finishing touches to a massive climate and spending package that they expect to pass on a party-line vote on Saturday to deliver a significant victory for President Joe Biden ahead of November's mid-term elections.
With Arizona Senator Krysten Sinema falling in line, Senate Majority Leader Chuck Schumer, says he has all 50 Democratic votes to pass the so-called Inflation Reduction Act using a complicated legislative procedure that will start on Saturday, reports dpa news agency.
The 11th-hour tweaks include some tax changes demanded by Sinema to win her support after fellow moderate Joe Manchin of West Virginia, agreed to resurrect the $700 billion deal that was believed to be dead last week.
Schumer said he had to cave to Sinema's insistence on cutting from the bill a provision to close a tax loophole that benefits hedge fund managers.
"She would not vote for the bill, not even move to proceed unless we took it out so we had no choice," Schumer said, adding that Democrats replaced it with a tax on corporate stock buy-backs.
Democrats need all 50 of their senators and Vice President Kamala Harris' tie-breaking vote to move the measure through the Senate over certain solid opposition from Republicans, who say the plan's tax boosts and spending would worsen inflation and damage the economy.
Sinema's quick agreement came as a welcome surprise to Democrats who fretted that the mercurial moderate would drag the talks out for days and possibly make demands that could be deal-breakers for Manchin or others.
Scant details of the last-minute compromise were released, and some warned that last-minute pitfalls could still scuttle the deal.
Republicans will likely seek to put forward a long string of amendments to gum up the legislative works and force Democrats to take politically damaging votes on issues such as border security.
"What will vote-a-rama be like? It will be hell," said Republican Senator Lindsey Graham of South Carolina.
The bill would mark a major win for Biden, who is enjoying a modest political winning streak that could lift his rock-bottom approval ratings and give Democrats a fighting chance of holding onto the Senate in November.
The breakthrough would give Democrats a potentially potent platform ahead of the midterms by addressing climate change, reducing prescription drug costs and increasing US energy security. They will also claim to moving to reduce inflation, though the Republicans will dispute that and analysts say its impact on rising prices would be minor.
"We've taken another critical step toward reducing inflation and the cost of living for America's families," Biden said in a statement.
Democratic infighting had weakened Biden and forced him to abandon a more-sweeping version of the plan last year.
Sinema said Democrats had agreed to remove a provision raising taxes on "carried interest", or profits that go to executives of private equity firms. That's been a proposal she has long opposed, though it is a favourite of Manchin and many progressives.
The Senate parliamentarian is reviewing the measure to decide if any provisions violate the chamber's procedures for avoiding a Republican filibuster for the so-called budget reconciliation process, a decision that could still upset the delicate balance in the bill.