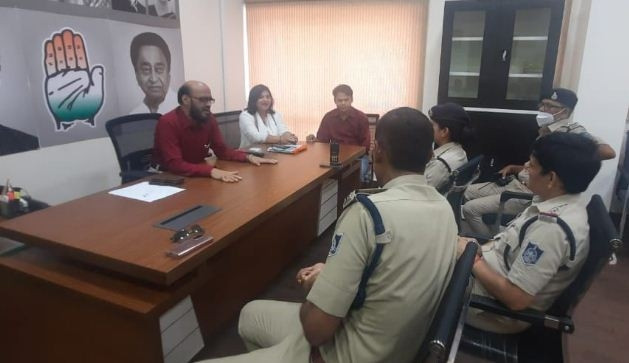 Bhopal, Aug 6
A team of the Madhya Pradesh police reached the Congress's state headquarter, Indira Gandhi Bhavan, at Shivaji Nagar here on Saturday.
They reached without any prior intimation at 1.30 p.m., just before a delegation of the party led by Vice President MPCC Media Department, Sangeeta Sharma, was set to leave the office to hand over a Tricolour to Rashtriya Swayamsevak Sangh (RSS) Chief Mohan Bhagwat, a source from the party told IANS.
The RSS chief, who is currently on a three-day visit to Bhopal, will attend the concluding meet of Vishwa Sangh Siksha Varg. The programme is to infuse Indian values among Hindus living abroad and its concluding ceremony will be held on August 7.
The Madhya Pradesh Congress unit had announced on Friday that they will handover a Tricolour to Mohan Bhagwat during his visit to Bhopal on Saturday and as per their plan, the Congress leaders were about to leave, when officials arrived and deployed a heavy police force outside the Congress headquarters.
The Bhopal police is yet to make any statement on this issue.
The Congress and the BJP has been involved in a verbal faceoff over the 'Har Ghar Tiranga' programme, which is part of the 'Azadi Ka Mahotsav' celebrations.