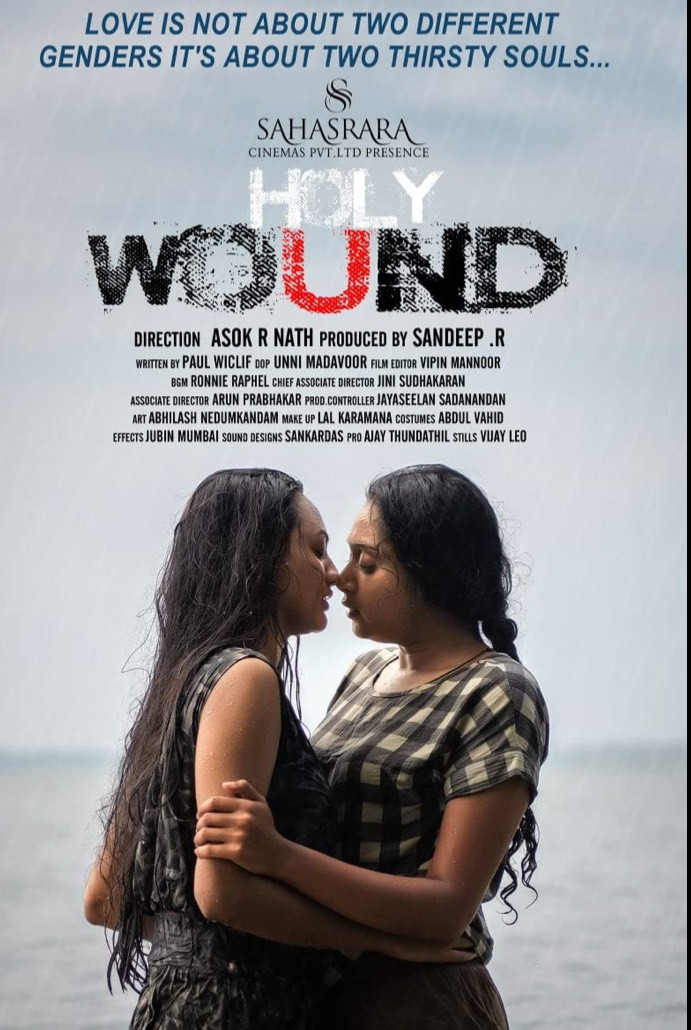 An Adults Only Review of the movie
Holy Wound- that may sound like something related to the Holy Angel, Holy Family, or the tortured wounds of Jesus Christ. Sorry, you are misled when you hear about a recent controversial Malayalam movie named like that. Still, it had already been screened in several film festivals, including Sahasrara International Film Festival, KASHISH Mumbai International Queer Film Festival, and Frameline San Francisco International LGBTQ Film Festival, and in an earlier interview with OTTplay.
Holy Wound is a unique movie depicting the story of two young Malayali village girls who have been in love since childhood. ‘Holy Wound’ is a 2022 Malayalam drama movie, written by Paul Wiclif., directed by Ashok R. Nath, produced by Sandeep R, and music by Ronnie Raphael, with Janaki Sudheer, Amrita Vinod, and Sabu Praudeen in the lead roles.
There are umpteen movies with the drama revolving around female homosexuality, but very low in Malayalam language. Of late one to join this league is Holy Wound, an erotic silent movie. Obviously the story is about two gay women, one gets married against her will and is subjected to sexual harassment, and another who is forced to become a nun.
Although love may not be the real reason for the revolving of the globe as such, ‘most adults' lives are powerfully influenced by their experiences in intimate relationships. It is believed that the psychologically healthy adult must have the capacity for work to earn, and love to cherish life. The significance of intimate relationships is no less significant for lesbians than heterosexuals. Taking granted the ‘new normal’ of accepting, the third category of the genre is still ‘not so normal’ to the common person, that too in a village where the people live in poor living conditions.
Having seen that most lesbians spend much of their adult lives in intimate love relationships, we are eager to turn to findings about the nature of lesbian relationships. Suppose the movie's message is to encourage lesbians; sorry to say that all the frames whenever these girls meet show their sexual gratification. The heroin Kala has enough sex almost every day, in various positions Vatsyaayan had imagined; she still urges her lesbian girlfriend to stimulate her passions to an ecstatic stage. Maybe the Director thinks that her relationship with her male partner living together is always for his satisfaction only, and he needs it so often.
The movie convinces us that gender is not a barrier to intense love. Love is the indescribable passion of two minds. Holy Wound movie moves forward with the intense emotional moments when two girls who have been in pure love since childhood reunite years later. The film's visuals are arranged so that its emotion is never lost through the green expression of such moments. Preparing moments based on the realism of lesbian romance will give the audience a whole new experience of emotional bliss and ecstasy. Good thing it is restricted for age+18 audience, and if it brings international recognitions, the Director can be proud of his efforts!
Set in the beautiful backwaters of Kerala, the story is about the life memories and desires of a 25-year-old girl Kala who finds her livelihood by fishing in the lake or collecting shells. Her cruel husband and a pervert continuously exploit her physically and mentally. She longs for real love and touches from a compassionate soul. She searches for Sherin, her teenage friend and one with whom she can share her emotions and feelings and share a very intimate physical relationship quite often.
The movie could have emphasized the concept that whether gay or lesbian, they can lead a happy life without the actual sex in its helms. Here the story fails and brings the negative message that these lesbian girls cannot live without their way of satisfying each other.
Of course, the end part of the movie, where a nun is lying naked in an open boat with her lesbian friend in the solitude of the lake, could hurt religious sentiments. The film is erotic and less touching on the lives of the original life system in a remote village. Preparing moments based on the realism of lesbian romance will give the audience a new experience of emotional scenes. It can be understood that Holy Wound drives home the message that homosexual relationship is not unnatural, and two partners belonging to the same sex can be in a relationship.
Though presenting a whole movie with all the sensors and emotional frames is weird, it may be beyond imagination that people started ignoring the efforts, emotions, and hard work that has delivered this masterpiece creation as a silent movie will attract meticulous attention. Nothing told, but everything revealed blatantly!
Dr. Mathew Joys