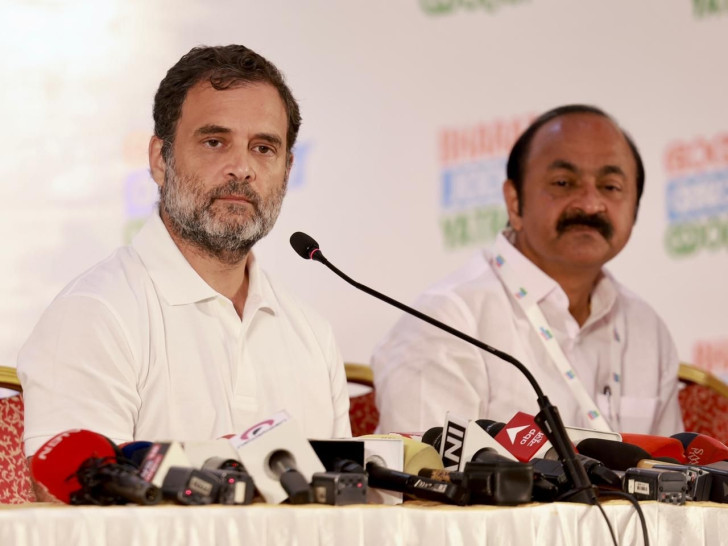 Kochi, Sep 22
Congress leader Rahul Gandhi, who is leading the 'Bharat Jodo Yatra', on Thursday called on opposition parties to chalk out a strategy to tackle the present divisive forces in the country.
I do think that the opposition has to come out with a strategy. They have to come together to fight the ideological, financial, and institutional power that has now come up in the country," Gandhi said while interacting with the media here on the 12th day of his yatra in Kerala.
He also pointed out that that he differs with the Left on how they view politics.
"I am getting handshakes from a good number of people who support the Left here as they know inside their hearts what I have raised about hatred is right," he said.
Gandhi, however, sidestepped numerous questions on if he will contest for the Congress President's post.
"I have answered this question in detail in my last press conference and it can be checked up... hence I will not say again," he said.
He also said that the post of the Congress President "is not an organisational post but it is an ideological post".
"It represents a set of ideas, a value system, and a vision of India," he added.
He also pointed out that each and every Congress worker can contest and asked which other parties has such a feature.
"Not a single party has that feature and hence it's good that if there is going to be a contest," he said.
To a question on the nationwide raids taking place at the offices of Popular Front of India and arrests, he said: "All forms of communal violence, regardless of from where it comes should be combated."
The yatra, which entered Kerala on September 11 from neighbouring Tamil Nadu, will exit the state on September 30, after covering 453 km through 43 Assembly and 12 Lok Sabha constituencies in 19 days.