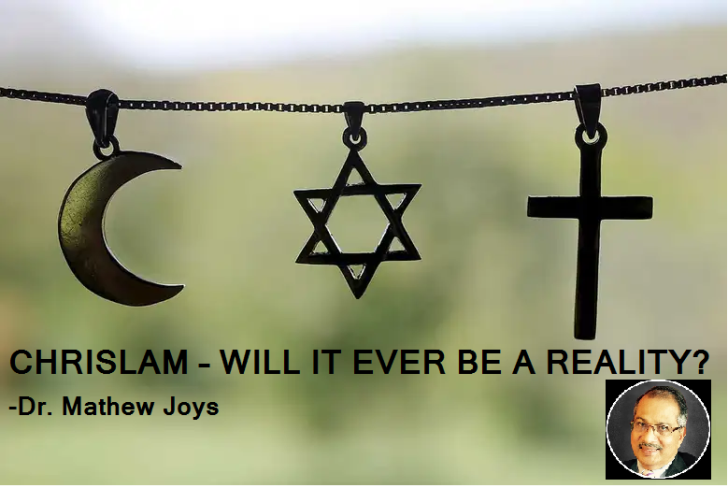 Have you heard about “Chrislam”?. It is not a new concept or ideology. Years back while reading Arthur C. Clarke’s fantasy novel, “The Hammer of God”, which describes the crisis caused by the imminent collision of an asteroid with planet Earth, this word “Chrislam” appeared somewhere in it.
Of course, now I understand that Chrislam is the movement that earned momentum, which is evident while reading an old article from EMIRATES NEWS: The world religious leaders today adopted the Human Fraternity Document signed by His Eminence the Grand Imam of Al Azhar and Chairman of the Muslim Council of Elders, Dr. Ahmed el-Tayyeb, and His Holiness Pope Francis of the Catholic Church, in Abu Dhabi in 2019.(NUR-SULTAN, 15th September 2022 (WAM).
The pope and the grand imam of al-Azhar have signed a historic declaration of fraternity, calling for peace between nations, religions and races, in front of a global audience of religious leaders from Christianity, Islam, Judaism and other faiths.
Chrislam was derived as an attempt to syncretize Christianity with Islam.
In the heartland of Islam that envelopes countries like Saudi Arabia, Yemen, and Bahrain, frequent outbreaks of fanatic extremism create enough suffering for the Christian community. But amidst this turmoil, they are able to share the love of Christ in surprising ways.
Sometimes this hatred explodes beyond hostility to hidden interests or agendas or policies or even countries and becomes a rejection of Western civilization. Eventually, it questions the principles and values that it practices and professes. These are indeed seen as innately evil, and those who promote or accept them as the "enemies of God."
Basically the Muslim and Christian views of their creator God has some similarities and resemblances. Christians believe in one eternal God Who created the universe. Muslims also believe these qualities to their Allah. Both view God as Omnipotent , all-powerful, all-knowing, and all-present.
Today, the descendants of Hagar, Ishmael, and Esau (Edom) are all Muslim nations (Islam). As we discussed, the “pure royal lineage” of Abraham, Isaac, Jacob, and their descendants, including Messiah, is Jewish (Israel). Again, although the nations are predominately Muslim, there are millions of Christian Arabs who love the Lord!
Religious leaders know very well that Islam and Christianity cannot be reconciled, for the differences between the two religions are vast and the similarities are few.
Allah and Yahweh are different deities. Allah is unknowable and unapproachable; Yahweh is personal, knowable, and invites us to approach His throne of grace. Allah has never spoken directly to a human being; Yahweh has spoken to people throughout history and continues to do so today. Allah reveals his will but not himself; Yahweh reveals Himself in creation, conscience, the canon of Scripture, and Christ – the Word who became flesh.
From a broader outlook the essential concept of Chrislam is that Christianity and Islam are interrelated and compatible. On the other hand it seems that anyone can be a Christian and a Muslim at the same time. Like Christianity or Islam Chrislam is not attributed as an actual religion of its own, but a diluting the differences and distinct views between Christians and Muslims.
Advocates of Chrislam points that Jesus is mentioned 25 times in the Qur’an. Christianity and Islam having similar teachings on morals and ethics. But the two largest monotheistic religions fight against each other gives the rise of atheism and other forms of spirituality. Chrislam is viewed as the solution for the ongoing conflict between the predominantly Christian Western world, and the Muslim dominated Middle East.
From the history, Chrislam refers to the assemblage of Islamic and Christian religious practices in Nigeria; in particular, the series of religious movements that merged Muslim and Christian religious practice during the 1970s in Lagos, Nigeria. The movement was pioneered by Yoruba peoples in south-west Nigeria.
the underlying religious concept of Chrislam is that "to be a Muslim or Christian alone is not enough to guarantee success in this world and the hereafter." As a result, Chrislam combines both Muslim and Christian practices.
“Sources generally describe Chrislam as a new one-world syncretic religion, linking it to what is about to become its headquarters: the Abrahamic Family House, an interfaith complex in Abu Dhabi, United Arab Emirates, whose main attractions will be a synagogue, a church, and a mosque, according to a concept by architect Sir David Adjaye. Construction is underway and is expected to be completed in 2022”.(ST.NETWORK). So at least the world has a monumental infrastructure to link with the concept of Chrislam!