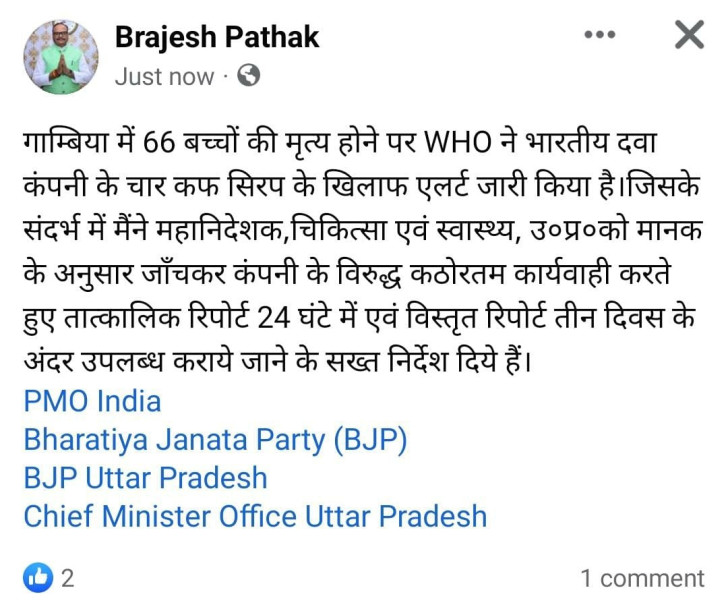 Lucknow, Oct 7
Drug inspectors in Uttar Pradesh will carry out surprise checks from Friday to seize any pack of the four cough syrups for which the WHO has sounded an alert.

A.K. Jain, drug controller of Uttar Pradesh, said, "Those four syrups are manufactured only for export. We are asking our drug inspectors to seize any pack found at wholesale or retail medical stores even though they are not supposed to be sold in the country."

Meanwhile, deputy Chief Minister Brajesh Pathak, who holds the heath portfolio, tweeted that he had asked the director general, medical and health, to probe the matter and take strict action against the concerned companies. He has sought an interim report within 24 hours and a detailed report within three days.

The World Health Organisation (WHO) has issued a medical product alert for four contaminated medicines identified in Gambia that have been "potentially linked with acute kidney injuries and 66 deaths among children". The preliminary investigations showed that the four medicines are cough and cold syrups produced by Maiden Pharmaceuticals Limited in India.

On Thursday, the Central Drugs Standard Control Organisation (CDSCO) sent the samples of the same batch of the four Maiden Pharmaceuticals Ltd-manufactured medicines, on which the WHO issued an alert, for testing. Further course of action would be decided after the results are received, the Union Health Ministry has said.