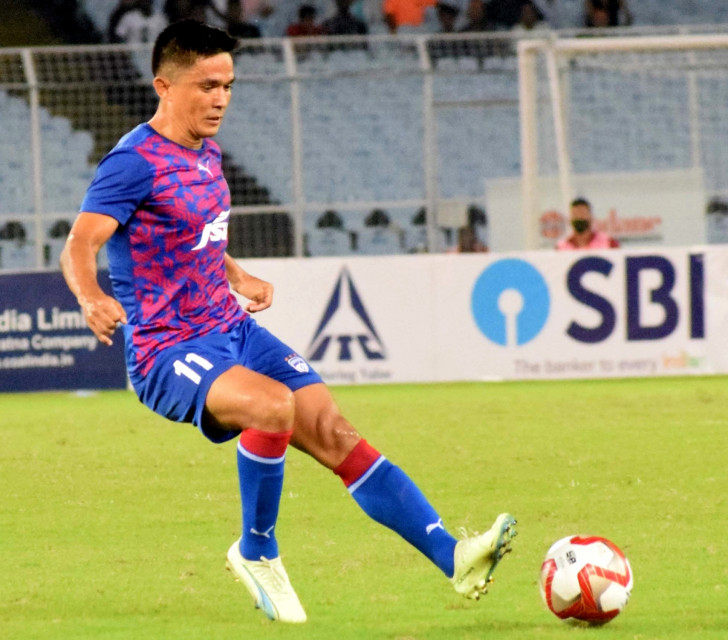 New Delhi, Nov 23
Sunil Chhetri, the captain of the Indian men's football team as well as Bengaluru FC in the ongoing Indian Super League (ISL), is third on the all-time active scorers' lists with 84 goals scored internationally - only behind Portugal's Cristiano Ronaldo and Argentina's Lionel Messi.
Now, the star forward reveals how he has managed to be successful for long in the football scene. "If you want to be a Ronaldo, you have to take a different path. And not many people are choosing this because it's difficult, boring and monotonous," says Chhetri to Kunal Shah, founder of CRED, for a fireside chat on the latest episode of CRED Curious show on Youtube.
Chhetri, considered to be the versatile talisman of the Indian football team for more than a decade, has had his share of heartbreaks as well on the path of being a successful footballer. One of those heartbreaks came off the field.
"I got a ligament-2 tear in my ankle and I rushed it. I could've waited for 2 to 3 weeks more, but I rushed it. And then, I was out for 6 months and I think that was the darkest point of my life. No one was talking to me because I was so negative. I think that was my worst time because I didn't like myself at that time."
Quizzed on what would be his advice to the youngsters who wish to be successful like him, Chettri remarked, "For the younger generation, wanting quick gratification and quick results is probably what's killing them. In sports there is only the long run, there is nothing quick. Even if you reach the top quickly it is all the more difficult to sustain it."
Currently at tenth place in the points table, Bengaluru FC's next match in the ISL will be against FC Goa at Jawaharlal Nehru Stadium, Goa on November 26.