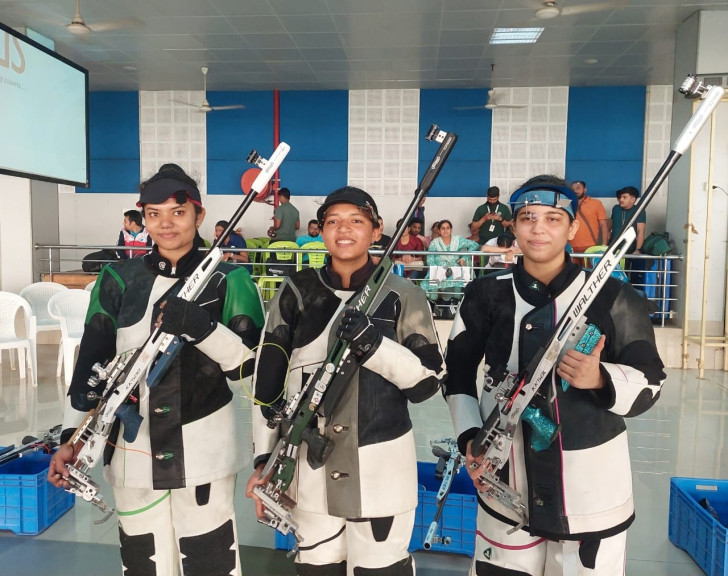 New Delhi, Nov 23
Punjab's Sift Kaur Samra was crowned national champion in the women's 50mm Rifle 3 Positions (3P), here at the Vattiyoorkkavu Shooting Range in Thiruvananthapuram, Kerala, venue of the 65th National Shooting Championship Competitions (65th NSCC) in Rifle events.
Sift handed out a 16-10 defeat to Rajasthan's Manini Kaushik, who had topped the qualifying charts a day earlier. Odisha's Shriyanka Sadangi won bronze.
Sift, who had finished sixth in qualification, emerged on top of the ranking round, with a score of 404.2. Manini was second with 402.9, which earned her the right to take on Sift in the gold medal match. Shriyanka was further back with 402.1, but that was enough for bronze.
They were followed by two current India internationals in Anjum Moudgil and Mehuli Ghosh, who finished fifth and sixth with scores of 401.2 and 347.8 respectively. Ashi Chouksey, Lajja Gauswami and Himany Poonia completed the top eight in that order.
Madhya Pradesh's Ashi was not denied a title on the day however, winning gold in the junior women's 3P, where she defeated Surabhi Bharadwaj Rapole of Telangana 17-9, in the gold medal match. Haryana's Nishchal won bronze.
Both Sift and Ashi in-fact picked up double golds winning the women's and junior women's 3P team titles respectively.