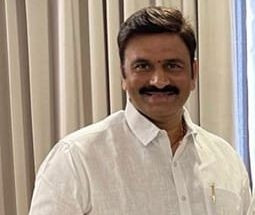 The SIT probing the sensational case has issued the notice under section 41A of Criminal Procedure Code.

The MP has been directed to appear before SIT officials in Hyderabad on November 29.

The probe team is reportedly looking to gather some key information relating to the case from Raju.

The MP, however, told media persons that he has still not received any notice. "If the notice comes, I will decide my future course of action," he said when asked if he would challenge it in the court of law.

He is the seventh person to be summoned by the SIT for questioning.

This comes a day after SIT summoned Pratap Goud, a lawyer from Amberpet area of Hyderabad, and Chitralekha, wife of Nanda Kumar, one of the three accused in the case.

Earlier, the notices were served on four persons but only one of them has appeared.

Bhusarapu Srinivas, a lawyer from Karimnagar, appeared before SIT on Monday and Tuesday.

The SIT has issued lookout notices for Tushar, an ally of BJP in Kerala and Jaggu Swamy as the probe team failed to locate their whereabouts. Circulars were also issued to prevent them from leaving the country.

The SIT has informed the Telangana High Court that Santosh is not cooperating in the investigation.

On Wednesday, the High Court asked SIT to serve fresh notice to Santosh. The probe team was asked to send notice through mail and WhastApp.

The court, however, refused to lift the stay on Santosh's arrest.

Telangana High Court had on November 19 turned down the request of BJP state unit to stay the notice issued to Santosh.

Santosh's name figured in the conversation between three alleged BJP agents arrested by the police last month while trying to lure four MLAs of TRS to the BJP fold with an offer of huge money.

Ramachandra Bharati alias Satish Sharma, Simhayaji and Nanda Kumar were arrested by the Cyberabad police from a farmhouse at Moinabad near Hyderabad on the night of October 26 when they were allegedly trying to lure four MLAs of TRS with offers of huge money.

Cyberabad police conducted the raid on a tip-off by Pilot Rohit Reddy, one of the MLAs. He alleged that the accused offered Rs 100 crore to him and Rs 50 crore each to three others.

The accused were booked under various sections of the Indian Penal Code (IPC) and Prevention of Corruption Act.